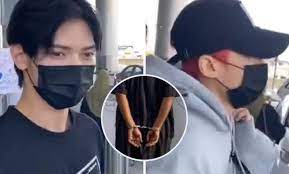 Riyadh, Oct 3 :  A Saudi man was arrested for harassing a Korean K-pop band Ateez on
their arrival here, a newspaper reported on Monday.
The Korean band arrived at the Saudi capital as part of their participation at the K-CON festival
held from Sep 30 to Oct. 1.
“The arrested citizen appeared in a video clip on social media, calling the band phrases that
would prejudice public morals during the arrival of the band,” the Saudi Gazette quoted a police
statement as saying.
The police added that legal measures were taken against him. The festival, which included an
exhibition highlighting Korean culture and an area dedicated to Korean products, saw a huge
attendance from Saudi fans during the weekend.
Videos showed fans greeting and holding welcome signs for the Korean bands at the airport. (Agencies)