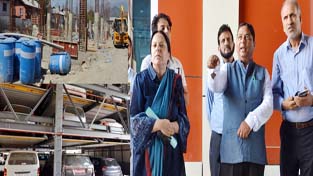 SRINAGAR: Minister for Housing and Urban Development, Sat Sharma today visited the ongoing projects being undertaken under the AMRUT scheme by the Srinagar Development Authority to upgrade and augment the city infrastructure and also provide the state of art parking facilities to the people of the state.

The projects inspected were the ongoing multi-tier parking coming up at Residency Road being constructed with an estimated cost of Rs 30 crore with an intake capacity of 467 vehicles besides also having space for offices and other related things.

He also inspected the pace of work on the Sheikh Bagh multi-tier parking coming up with an estimated cost of Rs. 25.08 crore with an intake capacity of 430 vehicles besides also having ample space for offices, shops and other business establishments.

While interacting with the offices, the Minister directed for speedy completion of these prestigious projects being taken under the ambit of AMRUT scheme maintaining that they would ensure that the parking problems of the people coming to the city centre are provided with state of art facilities. He said that these types of infra projects would further supplement the governments endeavor to make the capital cities as the model cities of the country.

Sat Sharma also called for strictly sticking to the stipulated time lines as that would ensure that the funds so earmarked are used judiciously and the cost escalation and other related para meters are checked.

The Minister earlier visited the parking facility constructed by SDA at Lal Chowk. He was told that the state of art parking facility has the capacity of accommodating 288 vehicles at a time and is fully mechanized.

He also   inspected the office spaces at the place and directed the officers to come with a comprehensive proposal so that they can be adequately utilized and revenue generated for the government.