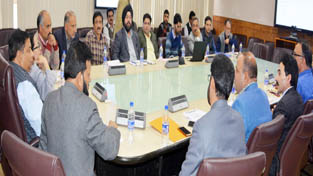 Excelsior Correspondent
SRINAGAR, May 8: Minister for Housing & Urban Development Sat Paul Sharma today directed the officers to ensure coordinated efforts for timely completion of various initiatives undertaken by the department so that the people are provided with quality housing amenities.
The Minister was addressing a review meeting convened to discuss the status of implementation of various schemes and initiatives undertaken by the Housing & Urban Development Department.
Minister of State Housing & Urban Development Department Asiea Naqash, Financial Commissioner Housing & Urban Development Department KB Agarwal, Vice Chairmen LAWDA, Managing Director J&K Housing Board, Commissioner Srinagar Municipal Corporation, Vice Chairman Srinagar Development Authority and other senior officers were present in the meeting.
The Minister directed the officers for ensuring timely completion of various flagship schemes so that the people get benefited from the initiatives undertaken by the Center and the State. He said there has to be necessary check and balances on cost escalation of the schemes as well in ensuring proper utilization of the funds.
While asking the officers to speed up implementation of the flagship program AMRUT, the Minister said that the scheme is holistic in nature viz-a-viz the urban development and work on it should be speeded up. He said the executing agencies so involved should hold regular meetings to remove the bottlenecks if any.
The Minister also directed for fast-pacing work on solid waste management programs being undertaken stating that the same is essential in maintaining the fragile ecology of our state and laxity in the same would not be tolerated. He said, “we should also ensure the success of Swachh Bharat program as the same is being personally monitored by the Prime Minister and it also ensures that our surroundings are made defecation and waste free.”
The Minister directed the officers for synergy and better coordination among the departments for implementing initiatives and achieving tangible targets on ground. He directed for conducting regular meetings and also involve the local representatives for better implementation and formulation of various initiatives.
He also reviewed the implementation of the programs being undertaken by the LAWDA, J&K Housing Board, Srinagar Development Authority, UEED, SMC and Urban Development agencies and directed the officers for ensuring that the schemes and programs being implemented by them are completed within the stipulated time so that the people get benefited from these.
The Minister asked the officers to regularly monitor the implementation of the schemes and also get the reacquired feedback about their efficacy so that the benefit percolates to the targeted areas and population.