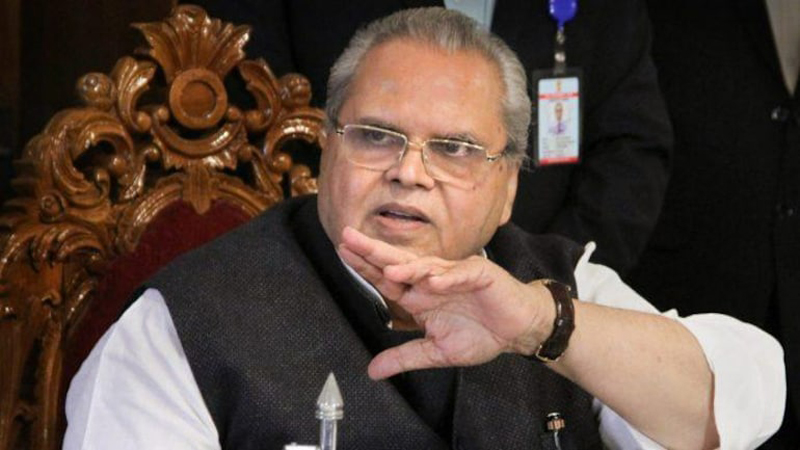 NEW DELHI, Sept 16:
Peoples Conference leader Sajjad Lone wanted to be Jammu and Kashmir Chief Minister just before the dissolution of the Assembly in 2018 although he had only six MLAs, the erstwhile State’s last Governor Satya Pal Malik has said.
Throwing light on behind-the-scenes political manoeuvring that preceded the dissolution of the Jammu and Kashmir Assembly by him in 2018, Malik, now the Governor of Meghalaya, described Lone as the “blue-eyed boy” of the Centre.
He said he had asked Lone to write to him about the support he enjoyed in the 87-member House. Lone said he had six MLAs but “told me if you administer me the oath, I will prove my majority in a week”.
Malik spoke of the circumstances in which he dissolved the Assembly in November 2018 although PDP chief Mehbooba Mufti had staked claim to form a Government with the support of the Congress and the National Conference (NC).
The PDP-BJP Government headed by Mehbooba had earlier collapsed in June 2018 after the BJP pulled out of the coalition.
Malik said he had told Lone, “That is not the governor’s role and I will not do it. The Supreme Court will flog me. The next day the Supreme Court will say you summon the House. You will lose. I will not do this.”
The Governor said it seemed that the PDP-NC-Congress combine may have had a majority but “foolishly” they had not held a formal meeting or passed a resolution or given a letter of support “to the lady (Mehbooba)”.
Malik told “The Wire” in an interview that he had spoken to the then Union Finance Minister Arun Jaitley about the situation and sought directions from the Centre. He said he had told Jaitley that if he got a letter from Mehbooba Mufti staking claim to form the Government, “I am bound to call her for oath”.
The Centre had not given him any advice and told him to do what he thought was appropriate. He had then dissolved the Assembly in November 2018, Malik said.
Mehbooba Mufti wanted to reach the Governor’s house with the support of 56 MLAs which included the Congress and the NC, but the letter could not be delivered as the fax machine of the Raj Bhavan in Jammu was out of order. (PTI)