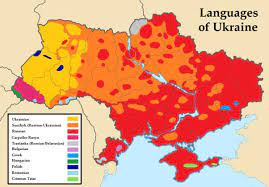 Moscow, May 24: Russian, along with Ukrainian, will receive the status of a state language in the Kherson Region liberated from Ukrainian nationalists, Kirill Stremousov, deputy head of the regional military-civilian administration, told Sputnik.
Russian, along with Ukrainian, will become a state language in the Kherson region. The Russian language will become the main language for office work, communication and all issues of national importance. We do not ban the Ukrainian language and will not somehow play any kind of language story,” Stremousov said.
According to him, teaching in schools and universities will be conducted in Russian, but at the request of parents, Ukrainian classes can also be formed.
The authorities of the Kherson Region will ask Russia to deploy a military base in the area, this will guarantee its security, he pointed out. “There should be a military base of the Russian Federation in the Kherson Region.
We will ask for this, and the entire population is interested in this. First of all, this is vital and will become a guarantor of the security of the region and its inhabitants,” Stremousov said.
According to him, now the Russian army protects the Kherson Region from constant attempts by Ukrainian nationalists to launch missile attacks on villages and cities. “The Russian army has become the guarantor of peace and security of our region,” Stremousov stressed.