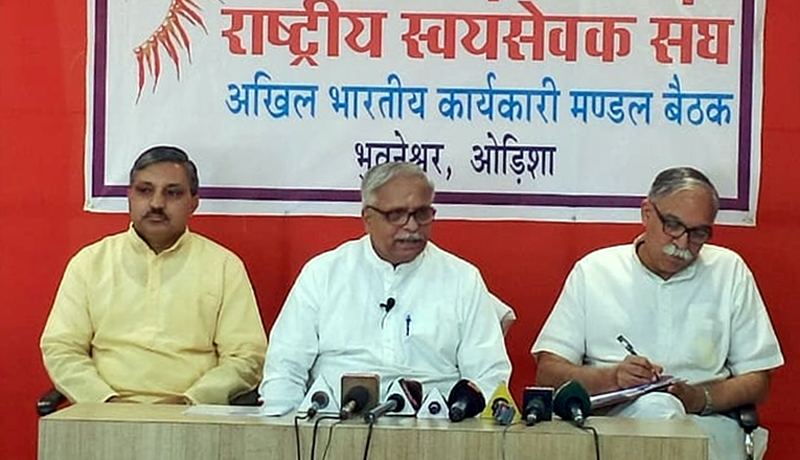 RSS on Friday expressed optimism that the Supreme Court judgment in the Ram Janmbhoomi-Babri Masjid land dispute case at Ayodhya will be in favour of the Hindus.
RSS general secretary Bhaiyaji Joshi told a press conference after the conclusion of the organisation’s Akhil Bharatiya Karyakari Mandal (ABKM) meeting here that RSS supports the enumeration for the National Register of Citizens and all states should adopt it for the welfare of the nation.
RSS chief Mohan Bhagwat was among those present at the press conference held after the conclusion of the three-day ABKM meeting, which was held for the first time in Odisha.
“We are hopeful that the Supreme Court verdict will come in favour of Hindus,” Joshi said to a question on whether the RSS will accept the Apex Court verdict when it is delivered.
The hearing in the politically sensitive case was concluded on Wednesday and the Supreme Court has reserved its verdict on it.
Asked to comment on some attempts being made for out of court settlement in the case, he said, “Attempts to find a solution through mediation has been there for a long time, but seemingly did not yield any result. Otherwise the case would not have gone to the court”.
RSS, he said, has been advocating for removal of hurdles before construction of the proposed Sri Ram Temple at Ayodhya for a long time. However, it was not been done and court proceeding had been going on.
Replying to a question on the contentious NRC, Joshi said, “Though the NRC enumeration has been done only in Assam, all states should adopt it and ensure that the Indian citizens are not deprived up of their rights due to infiltrators … The states should adopt it for the welfare of the nation and its security. The country and the state should have the actual position of its citizens”.
The RSS general secretary said that it is the responsibility of any Government to know the actual position of its citizens in the state and identify the migrants and the administration should ensure that anti-national activities stop.
“Such an exercise (NRC enumeration) has become essential as some states are overflowing with outsiders who are collaborating with anti-national forces and working against Hindus.
“NRC is also essential to identify infiltrators from neighbouring countries in order to arrest the growing demographic imbalance and threat to country’s security,” Joshi said.
He claimed that there was “ethnic cleansing of Hindus” in West Bengal and expressed concern over it when asked to comment on the killing of three members of a school teacher’s family at Jiagunj in West Bengal’s Murshidabad district during Durga Puja earlier this month.
“This has to stop immediately. The silence of the West Bengal Government was somewhat surprising given the fact that Bengal has a history of peace and amity,” he said.(PTI)

2 die after hit by train, child killed in road mishap