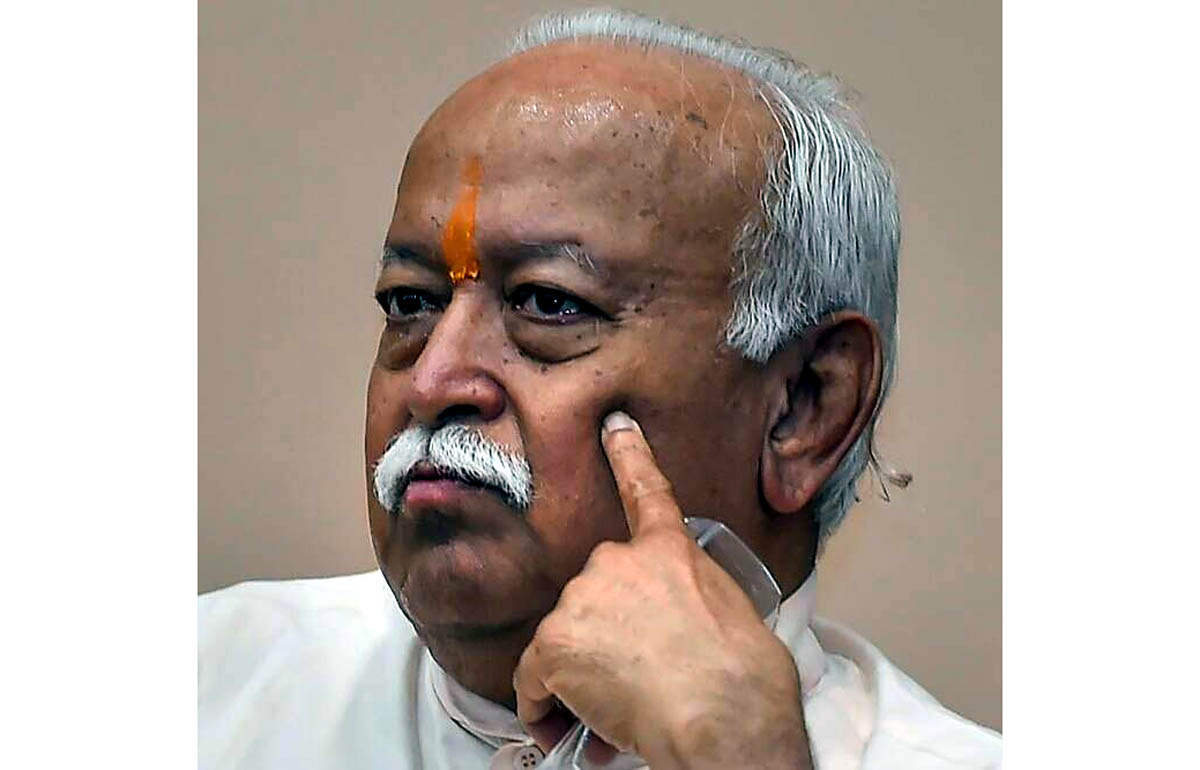 NEW DELHI, Sept 22: Taking forward his outreach to the Muslim community, RSS chief Mohan Bhagwat on Thursday visited a mosque and a madrassa here and held discussions with the chief of the All India Imam Organisation who termed him ‘rashtra pita’.
The Rashtriya Swayamsevak Sangh ‘sarsangchalak’ went to a mosque in central Delhi’s Kasturba Gandhi Marg and followed it up with a visit to the Madarsa Tajweedul Quran in Azadpur in north Delhi.
This is the first time he has visited a madrassa, an RSS official accompanying him said.
All India Imam Organisation chief Umer Ahmed Ilyasi used the ‘rashtra pita’ descriptive for Bhagwat while talking to children at the madrassa. However, Bhagwat intervened to say there is only one father of the nation and said everyone is ‘Bharat ki santan’ (child of the nation), according to the RSS official.
He said the RSS chief also spoke to the children about the need to know more about the nation and stressed that while the modes of worship could be different, all religions must be respected.
Ilyasi and Bhagwat held talks for about an hour at the mosque, which also houses the office of the All India Imam Organisation and the cleric’s residence.
“He is a ‘rashtra pita’. We discussed several issues for for strengthening the country,” Ilyasi told PTI, adding that Bhagwat had visited the mosque as well as madrassa on his invitation.
“With this visit of Bhagwat, a message should go that we all want to work towards strengthening India. For all of us, the nation comes first. Our DNA is the same, it is just that our religion and methods of worshipping god are different,” Ilyasi said, echoing the RSS chief’s words.
Bhagwat was accompanied by senior Sangh functionaries, including joint general secretary Krishna Gopal and Muslim Rashtriya Manch patron Indresh Kumar.
In a statement after the visits, RSS Prachar Pramukh Sunil Ambekar said, “Sarsanghachalak meets people from all walks of life. It is a part of the continuous general ‘Samvad’ process.”
The significant visits by the head of the BJP’s ideological mentor came on a day multiple probe agencies conducted raids across the country and arrested more than 100 activists of the Popular Front of India for allegedly supporting terror activities in the country.
The RSS chief has been holding discussions with Muslim intellectuals for strengthening communal harmony over the last few weeks.
He recently met Delhi’s former lieutenant governor Najeeb Jung, former chief election commissioner S Y Quraishi, former Aligarh Muslim University vice chancellor Zameer Uddin Shah, former MP Shahid Siddiqui as well as businessman Saeed Shervani.
During the meeting, Bhagwat reportedly raised the issue of the usage of the word “kafir” for Hindus, which he said does not send out a good message. The group of Muslim intellectuals, on their part, objected to some right-wing activists calling Muslims “jihadi” and “Pakistanis”. (PTI)