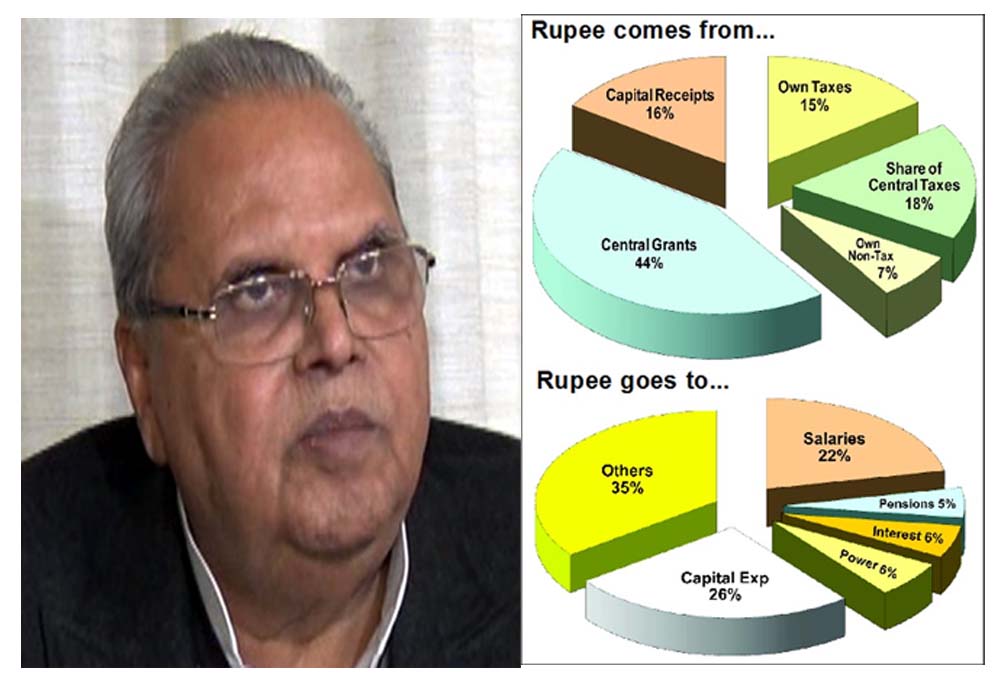 Sanjeev Pargal
JAMMU, Dec 15: No new taxes have been imposed in the budget for 2019-20 worth Rs 88,911 crore, which was approved this evening by Governor Satya Pal Malik-headed State Administrative Council (SAC) giving major push to Building Infrastructure, Institutions and Systems and keeping budgetary provisions for various developmental projects in the State with Jammu and Srinagar cities, Panchayats, Municipalities and sports getting major thrust.
The SAC headed by the Governor and comprising all three Advisors including K Vijay Kumar, Khurshid Ganai and Kewal Kumar Sharma, Chief Secretary BVR Subrahmanyam and Principal Secretary Umang Narula approved the budget this evening after detailed briefing given by Principal Secretary, Finance Department, Navin Choudhary.
The budget neither proposed any new taxes for next financial year nor changed any existing rate of tax structure. However, it kept budgetary provision for various ongoing projects across the State. Total budget for current financial year of 2018-19 was to the tune of Rs 80,313 crore, which has gone up to Rs 89,467 crore in the Revised Estimates. How-ever, budget for next financial year of 2019-20 has been pegged at Rs 88,911 crore.
The Fiscal Deficit, which was projected at Rs 9673 crore in 2018-19 has been put at Rs 19,529 crore in the Revised Estimates for this year and was expected to come down to Rs 13,996 crore in 2019-20.
Unfunded/additional resources required were projected at Rs 9876 crore in the Revised Estimates for 2018-19 and Rs 4340 crore for 2019-20.
The budget focused on Building Infrastructure, Institutions and Systems and gave major focus on development of Jammu and Srinagar cities besides town and rural areas, heavy funding to Panchayats, Municipalities and Sports, which was today exclusively reported by the Excelsior.
The Government proposed to create Metropolitan Authorities for twin capital cities of Jammu and Srinagar with an initial provision of Rs 100 crore. This will be supplemented by funding available under Smart Cities and institutional borrowing. It proposed another Rs 500 crore for construction of drainage and sewerage, Sewerage Treatment Plants (STPs) and solid waste disposal plants across the State. It has kept a provision of Rs 10 crore for River Front development in Jammu City and connecting Vikram Chowk with Gujjar Nagar bridge along river Tawi.

After successful conduct of Panchayat and Municipal elections in the State after gap of several years, the Government has kept major provision of Rs 1151 crore for Panchayats and Rs 464 crore for Urban Local Bodies followed by Rs 1422 crore and Rs 566 crore to Panchayats and Municipalities the next year.
“Within a time frame of 15 months, Rs 2573 crore will flow to Panchayati Raj institutions and Rs 1030 crore to Municipalities,’’ the budget revealed and announced that every Panchayat will get Rs 20 lakh to Rs 1 crore depending upon the area and population.
The budget has doubled allocation for rural sector to undertake works of urgent public needs. Rs 130 crore have been proposed for tourism infrastructure.
The budget has kept a provision of Rs 400 crore for augmentation of infrastructure including waste disposal in all existing and upcoming industrial estates and support the process of improving ‘Ease of doing Business’.
The budget has increased four times the funding for macadamization of roads. Till now, Rs 100 crore were provided for macadamization of roads every year but for next financial year, the Government has enhanced the amount to Rs 400 crore.
The Public Health Engineering has also got a major boost in the budget. Rs 1500 crore have been kept for drinking water supply schemes across the State. A mega project to provide drinking water supply from Chenab river is expected to be funded by the Asian Development Bank (ADB) shortly for which required commitment from the State budget will be met. The State share has been kept in the budget for Ujh and Shahpur Kandi projects.
The budget has a provision of Rs 350 crore for massive up-gradation of sports infrastructure during 2019-2020 when all stadiums and playfields will be completed.
The budget has kept a provision of Rs 200 crore for next financial year and Rs 50 crore for remaining months of current fiscal for generating infrastructure and manpower for 40 new degree colleges being opened in the State and the degree colleges, which have already been established.
Health sector has also got a major focus in the budget.
The Government has kept a provision of Rs 350 crore for completion of all under construction buildings of Medical Colleges, District/Sub-District hospitals and Primary Health Centres during 2019-20. Another Rs 100 crore have been proposed for equipments for the hospitals.
In addition to Rs 2000 crore for tourism infrastructure building under Prime Minister’s Development Plan (PMDP), the Government has provided Rs 130 crore for augmentation of the staff of Tourism Department.
For complete transformation of power network by the end of 2019-20, the Government has kept a provision of Rs 300 crore to meet the gap by way of construction of transmission/distribution line, receiving stations etc.
The Government also proposed to re-structure Jammu Kashmir State Power Development Corporation (JKSPDC). The Company will become debt free with larger equity base and host of projects in the pipeline. The Government proposed to turn JKSPDC into a bigger company than even Jammu and Kashmir Bank. The Government will converts grants and loans into the equity base of JKSPDC.
The Government has kept a provision of Rs 5000 crore for power purchase during 2019-20 and revised the estimates for similar expenditure during current financial year to Rs 5261 crore as against budgetary provision of Rs 4700 crore.
For the first time the budget has been prepared by a single agency i.e. Finance Department. As a result a complete holistic view of both revenue and capital expenditure requirements being carried out by each Department has been assessed. The proposed budget fully meets the State share requirement of all Centrally Sponsored Schemes, Prime Minister’s Development Plan (PMDP) as well as projects of significance. All existing developmental programs in various sectors have been fully funded.
The SAC was informed that the focus of the Budget 2019-20is to give a big push to tangible developmental initiativeswith Rs 30469 crore earmarked for building public and social infrastructure in addition to Rs 3631 crore already provided under “Languishing Projects Programme.”
The SAC observed that investment in infrastructure is the growth driver for economy and has a cascading impact on all sectors including employment generation and socio-economic development.
According to Chief Secretary, BVR Subrahmanyam, the budget 2019-20 is structured around three fundamental objectives of Building Infrastructure, Building Institutions and Building Systemsunder the Government’s overarching Mission for Delivering Development and Mission on Good Governance.
He said the Budget is aimed at driving the state’seconomic growth through multifarious initiatives with thrust on substantive developmental and welfare measures.He said the investment in key developmental and social sectors has been enhanced substantively to leave a visible impact on the ground.
The Chief Secretary said to build adequate capacities in the Line Departments for spending huge developmental funds, it has been decided that the line departments would be adequately strengthened by way of providing consultants, setting up of dedicated DPR preparation cells and Project Implementation Agencies and IT Consultants etc.