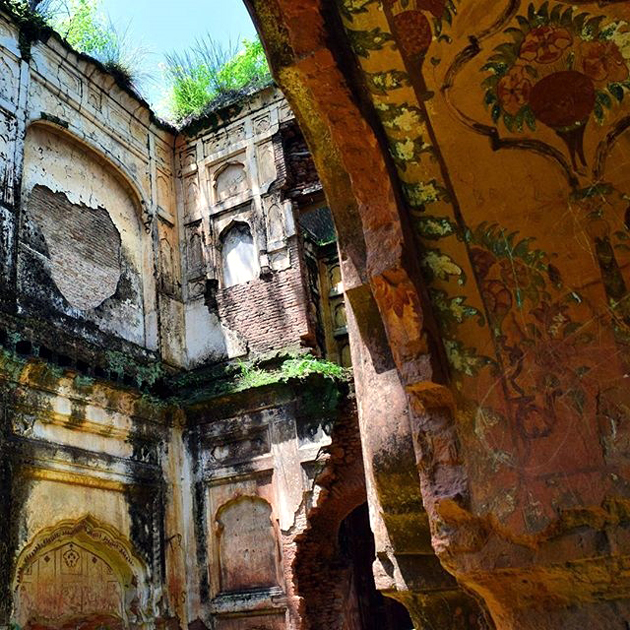 Aruditya Jasrotia
A concerted effort to preserve our heritage  is a vital link to our cultural legacies and it literally makes us who we are. People tend to believe that to be modern you have to disengage from your heritage, but it’s not true.
One of the important heritages of Jammu which is waiting to be explored and preserved is Jasrota Fort. Jasrota is a place, situated just 10 kilometre away from the National High way Rajbag, Kathua, in the Shivalik Hills of the Western Himalayas. It was the capital of the Jasrotia Rajputs. It was founded by Jas Dev, a ruler of the Royal House of Jammu and Kashmir, who gave it to his brother, Karan. Jasrota was one of ten states founded by members of the Dogra dynasty. Stories tell that Karan Dev was a son of Bhujdev, a ruler of Jammu, and that the state came into existence in either the 12th or early 13th century. There is an agreement that Karan Dev was the founder of the ruling Jasrotia family. Ajab Dev was ruler of Jasrota between 1790-1800. He arranged the construction of Jasmergarh Fort (near to the present-day town of Hiranagar, then on the border of his territories) in order  to protect Jasrota from invadors. The last member of the Dev dynasty to rule Jasrota independently was Randhir Singh, who reigned from 1805 to 1820. Although Randhir Singh’s brother, Bhuri Singh, was nominally recognised as his successor, Ranjit Singh annexed the territory in 1834 and converted it into a jagir that was gifted to Hira Singh, a son of Dhian Singh, the Dogra Prime Minister of Lahore, who was also a nephew of Gulab Singh.
It is not the honour that you take with you, but the heritage you leave behind. Hira Singh contributed enormously in saving the art and traditions of that time and because of his efforts the art and architecture flourished during his rule. It was Hira Singh who built the present fort at Jasrota, although its foundations date from around the 12th or 13th century. Hira Singh resurrected a connection with art. In building palaces of architectural splendour within the fort walls, he brought in painters to ornately decorate them. Jasrota had been particularly associated with the Dogra school of painting during the reigns of Bhupal Dev, Sukh Dev and Dhruv Dev, which began in the late 17th century and ended in 1735. Charak and Billawari say that “The great miniature tradition in the hills owes much to Jasrota”, noting in particular the patronage of the family of the painter Nainsukh by Raja Balwant Singh and also the ongoing attendance at the royal court at Jammu, where Jasrota rulers sometimes served as diwans and would have been influence by its culture. The Nainsukh painitng style is a fascinating art which has attracted attention from both the scholars and researchers from time to time. Dr. B.N. Goswamy and Eberhard Fischer have written a book “Nainsukh of Guler: A Great Indian Painter from a Small Hill-State”. This book glorifies the importance and magnificence of the Nainsukh painting style.
At this time hardly anyone goes to see the beautiful fort which is holding a number of beautiful artworks on its walls. The condition of the fort is pitiful and brings the feeling of hollowness to the visitors. The walls are falling one by one, roofs have collapsed, vegetation has taken over almost all of the fort and it is in shambles. The deteriorating condition of the Jasrota fort has exposed the true approach of the tourism department towards the upliftment of the spot while it has been claimed many times by the tourism department that they are investing  lakhs of rupees in order to save this fort. Jasrota is widely famous for its natural scenic beauty which has huge existing tourism potential which needs to be tapped properly. While having the enormous tourism potential the Jasrota fort has been ignored in tourism upliftment by the government.
The condition of this fort is very distressing and disturbing. The locals say that the department is fully aware about the condition of the Jasrota Fort, but no action will be taken by the authority. Number of articles and columns have been written about the condition of the fort but the locals are still waiting for the government to step in and help them in saving this heritage. The Jasrota fort and its architecture are fighting against time and it’s not too late to save the heritage which holds an important spot in the history of Jammu. It’s the need of the hour to preserve our heritage, otherwise we will only have stories to tell but nothing to show to our coming generations regarding our history.