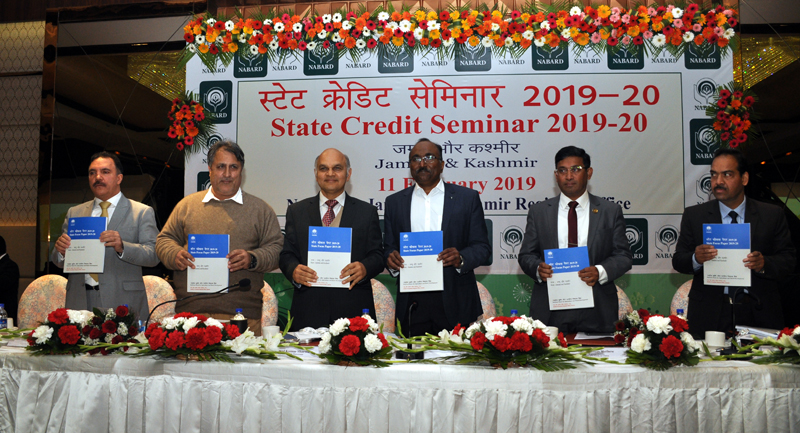 JAMMU, Feb 11: Advisor to Governor, Kewal Kumar Sharma today said that role of banks is pivotal in promoting human development by way of providing avenues for economic development besides ensuring the creation of assets.
The Advisor was speaking at the inauguration of State Credit Seminar 2019-2020 organised by regional office of the National bank for Agricultural and Rural development Bank (NABARD) here today.
The seminar was attended by Principal Secretary Animal and Sheep Husbandry, Dr Asgar samoon, Regional Director RBI, Chairman Jammu and Kashmir Bank Parvaiz Ahmad, Chief General Manger NABARD and other senior officers of NABARD, banks and officers of different departments.
The Advisor said that the banks provide necessary support to different aspiring entrepreneurs and the Government with the necessary monetary and credit support to undertake varied activities both economical as well as developmental initiatives. He said that since the majority of the population of the state lives in the rural areas so that role of NABARD is very significant in economic activities as well the developmental works.
Enumerating the benefits of NABARD’s support for creation of rural infrastructure the Advisor said these projects have significantly contributed to the socio-economic development in rural areas and have enabled the State Government to fund major rural infrastructure projects, which otherwise could not have been taken up due to limited financial resources.
Referring to the initiatives undertaken by the Government for completing the languishing projects of the state, the Advisor said that the banks should also contribute in providing the necessary budgetary support for these initiatives. He said that the banks should also come up with new ways and means to accelerate the economic activities of the state especially in the rural and far flung areas.
Regional Director RBI while speaking on the occasion highlighted the initiatives undertaken by the bank in economic sector.
Chairman JK Bank also spoke on the occasion and gave overall brief about the initiatives undertaken by the bank in accelerating the economic activities of the state besides extending several schemes to the aspiring entrepreneurs.
Later, the Advisor also met a deputation of Industries Federation of Jammu comprising the Presidents of Jammu, Samba and Kathua chapters.
The deputation raised several issues related to the industrial sector like toll tax, SRO 431 and release of pending payment with PDD.
The Advisor assured the deputation that all their issues would be looked into.
Director Industries and Commerce Jammu, Anu Malhotra and other senior officers were present on the occasion.