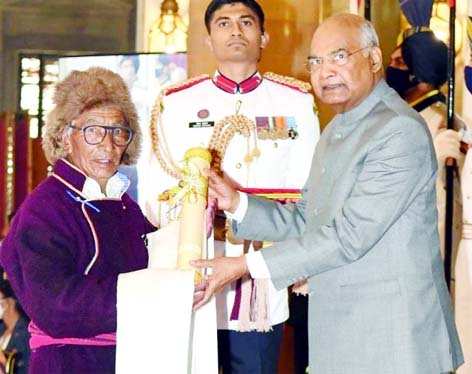 Morup Stanzin
Life in the hilly and snowbound area of Zanskar in the newly formed Union Territory of Ladakh is full of difficulties especially during winter months mostly because the road link to the region remains absent which makes these difficulties further complicated and the life there can’t be even expressed and understood by all.
Decades and decades passed after the country got its independence and regimes too changed many times but the sufferings of the people in this remote corner of India remained unchanged till a determined septuagenarian, touched by the miseries of the people of his area, made his mind to connect Zanskar with Darcha in Himachal Pradesh via a road—a shortest link with outside world.
The task was not so easy for Chhultim Chonjor, 79, who was a poor man and who mostly grazed goats to manage his livelihood. The project required lot of money.
Anyhow determination, good and selfless intentions paved the way and people too came forward for support and joined hands leading ‘the mission road’ to gain strength finally completing the otherwise impossible task within few years, ushering the people of Zanskar to a new era of happiness, progress and prosperity.
The achievement of Chhultim Chonjor, who is popular in Zanskar as Mey Mey Chhonjor was recognized by the Government of India and the man from mountains was honoured with Padma Shri in November 2021. In an exclusive interaction with Excelsior, he said that the 40 km road connecting Zanskar with Darcha (in Himachal Pradesh) incurred an expenditure of about Rs. 92 lakh for which he initially started the work single handedly in 2014 and completed his dream project in 2018.
“Initially I got no support from the government or anyone else and that forced me to sell my property including ancestral land to start the road construction which I started from Himachal side by engaging a JCB and five donkeys,” he said. However, as the work started becoming visible on ground, people including some elected public representatives and locals started contributing for the project and about Rs. 14 lakh was collected in this way.
“Although General Reserve Engineer Force (GREF) had already started work on 140 km long Zanskar-Darcha road from both sides but it was going on at a very slow pace which compelled me to start the construction at my own level,” Chonjor claimed.
The toughness and intelligence of this mountain man can be better judged from the fact that he constructed the 40 km long stretch without taking any technical expert support.
Now, the Hero of Zanskar, Mey Mey Chonjor had earlier worked with some of the prominent leaders of Ladakh like late Gyalsras Bakula Rinpoche, Sonam Wangyal, Engineer Dawa, Baba Rasool etc to name a few and he had gained tremendous knowledge and expertise from their company.
“Zanskari students, now, will not have to travel during winters by crossing snowbound high passes to reach outside world,” the elder said adding that thousands of people are now benefitted due to the road he has made.
Chhonjor tells that power scenario at Zanskar is not as it is supposed to be and it is solar power mostly there which is used by the residents of the area while water supply in the region is almost negligible, yet the road made by him has helped the people there to a large extent as goods can now reach Zanskar easily and by spending very less money than what used to be done earlier.
In a message to the youth, the elder of Zanskar says that one should work hard in life and should not forget one’s culture.
He also said that there are many Government schemes to benefit the youth and the younger generation should avail benefits from such schemes.
“One should not forget his bad time of life and should not hesitate in helping others,” Mey Mey Chhonjor maintained.
At home he has his wife which he says remains busy in farming and is very elated on his getting Padma award.
During the award ceremony in Delhi, Chonjor met President of India, Ram Nath Kovind; Prime Minister, Narendra Modi and Lieutenant Governor of Ladakh before whom he highlighted various issues of Zanskar region.