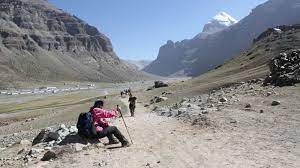 We principally have no qualms about the stand taken in normal course by the Forest Department and even Wildlife Department in according top most preference to save areas of forest land than even to development projects if it comes at the cost of the already shrinking forest cover of Jammu and Kashmir. It should not be at the cost of disturbing the wild life habitat and their natural equilibrium too. We have been curiously but haplessly watching small measure of rains causing destruction and devastation especially in and near the areas which a few decades ago used to be dense forests. We also see in many parts of the country how wild animals like leopards, tigers , elephants etc intrude into residential colonies since their places and habitats are increasingly been disturbed for purposes of promoting urbanisation. With reference to our own UT of Jammu and Kashmir we also see how lakhs of kanals of forest land have not only been encroached upon but residential colonies are established there . PILs etc in respect of such encroachments of forest land are being heard by the High Court.
If a rigid and uncompromising stand based on set rules, procedures and various laws governing usurping Government land would have been taken by the concerned authorities of Forest and Wildlife departments as and when reports received about encroachments by them , lot of forest land could have been saved. It is not that rarely some assertive authority / departmental Head should show courage in taking a stand all in the interests of the people but the pledge and the sense of duty towards the public should make all concerned authorities assertive. This prelude was necessitated to be mentioned looking to somewhat an inelastic stand taken by the two concerned UT Departments in respect of constructing vital roads that may pass through the forest cover in respect of the pilgrimage to famous and revered Kailash Shrine in Bhadarwah in Doda district. It may be noted that Kailash Kund pilgrimage centre lies on the enchanting and picturesque Seoj Dhar in Bhaderwah . It is , therefore, imperative that the two projects of construction of vital roads worth Rs.83 cores and Rs.10 crores respectively be given all clearance by the two UT departments.
As already said that we do not dispute in principle about certain objections that might have been raised by the concerned departments which have put the construction agencies like Roads and Buildings and Prime Minister Grameen Sadak Yojna (PMGSY) departments on hold in respect of going ahead with the proposed construction. We also note the concern expressed by the Forest Department about hundreds of trees going to be axed during implementation of the roads construction projects leading to the Holy shrine place. To address that , if some changes in the two projects are made so as to ensuring that minimum loss of green cover took place , that alternative should be explored. Besides, compensation not in terms of paying the ”cost” but in terms of massive afforestation should be undertaken . We have on the other hand , unfortunately to live with this irrevocable choice to cause some type of damage or loss to the available forest cover wherever infrastructural development projects are to be raised, be those in respect of construction of dams, power generating houses, constructing and widening of existing roads passing through or around the forest cover being compulsions of development . The endeavour, however, should be and seriously so, about how much loss of forest cover was compensated for our own survival .
That apart, we also must as in the instant case , evaluate whether the concerned project had in its broader aim, certain benefits and advantages for the economy of the UT and the general public especially belonging to the concerned places/ areas. In the subject matter, the two roads when completed would introduce new unexplored most beautiful spots and areas of high tourist potential besides providing convenience to thousands of pilgrims to the famous Hindu shrine thus fulfilling social, cultural and spiritual objectives of large sections of our society and thus to promote religious tourism . That was going to generate lot of opportunities of employment and other economic activities. In that perspective, the two project proposals be perused and analysed by Forest and Wildlife Departments respectively. Therefore, a via-media needs to be found out and some sort of agreements reached by all those with a stake in the entire process so that pilgrims could be put to convenience in respect of their travel through these roads to the Holy Hindu pilgrimage centre . It is also to be seen how not only because of the pilgrimage to the captivatingly beautiful Seoj Dhar could lot of commercial activities be generated but the potential of the place being like Gulmarg in Kashmir could be developed for promoting winter sports and snow skiing too. Therefore, some alignments, changes and alterations which are mandatorily required in the projects to be made must be considered so that clearance was given to the twin projects at an early date.