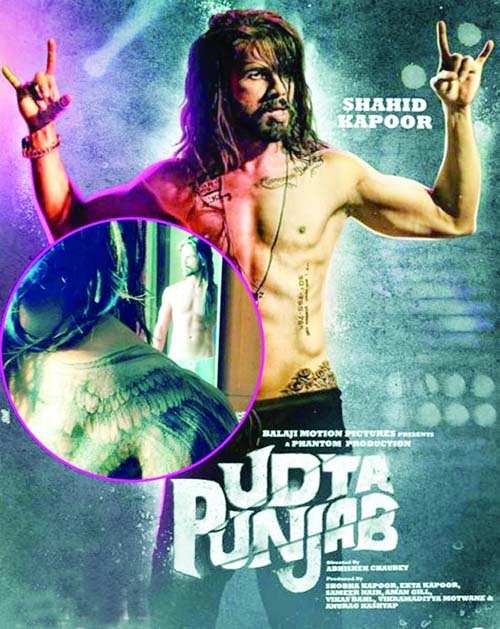 Saibal Chatterjee
As Abhishek Chaubey’s Udta Punjab begins to unspool, it becomes apparent almost instantly that it isn’t an average commercial Hindi film. It is easy to see why influential forces wouldn’t want it to be seen.
It is a film that articulates the bitter truth – yes, much of it might have been exaggerated for dramatic effect – about the reality of substance abuse in Punjab and its causes. In language and deeds, it pulls no punches.
The screenplay, jointly written by Sudip Sharma and the director, is unambiguous about its stand on drug addiction: it sides with those that lead the fight against the peddlers and with those who wage war on their inner demons.
Bolstered by strong acting all around, Udta Punjab soars on the wings of an edgy storyline that goes for the jugular. As the robust title songs plays out, the film introduces the audience not only to the volatile man who belts out the number – pop star Tommy Singh (Shahid Kapoor) – but also to three other principal characters without spelling out who they are.
Over the next few minutes, the script quickly places the crucial narrative cards on the table.
A Bihari girl (Alia Bhatt) who works on an agricultural land on the border, stumbles upon a pouch of heroine that has been thrown in from across the border as part of a deal. Assistant sub-inspector Sartaj Singh (Punjabi actor-singer Diljit Dosanjh in his first Bollywood role) is seen as part of posse of compromised cops who let trucks with drug consignments pass their checkpoint for a consideration.
Fighting the worsening drug menace is Dr Preet Sahani (Kareena Kapoor Khan), whose role expands when the ASI’s heroin addict brother is wheeled into her hospital frothing at the mouth.
From here on, Udta Punjab presents a life and death battle for all the four – the crooner and the farm hand fight to drag themselves out of a hole, while the cop and the doctor join forces to get to the bottom of the drug racket.
While the first half of the film is devoted largely to setting the stage for the dramatic high points leading up to the climax, Udta Punjab turns increasingly violent as the cop’s young brother tries to flee the de-addiction centre, Tommy Singh runs away from a concert, and the nameless Bihari migrant worker makes a dash for freedom from those that have held her captive.
The climax of Udta Punjab, which is explosive and bloody, defines the enormity of the crisis that the north Indian state faces today.
Udta Punjab makes no bones about who is to blame for the current situation. It goes to the extent of pointing fingers at elected representatives of the people and fake pharma companies that divert government-controlled supplies of opium to feed the state’s drug cartels.
Udta Punjab is a rare Mumbai film that blends a riveting, and often unsettling, narrative around facts and details drawn from real news reportage. It does so with style and flair, aided immensely by outstanding performances by the principal cast.
Shahid Kapoor does not hold back a whit in fleshing out the robust but troubled rock star. Dosanjh, in contrast, underplays his part to great effect.
Kareena Kapoor Khan, who has the least etched out of the four principal roles, makes the most of the limited opportunities.
Alia Bhatt is a revelation in Udta Punjab. She subsumes her peppy urban girl persona into her rustic character so completely as to be barely recognizable.
Udta Punjab is a thriller that offers much more than the genre usually does. Unmissable.