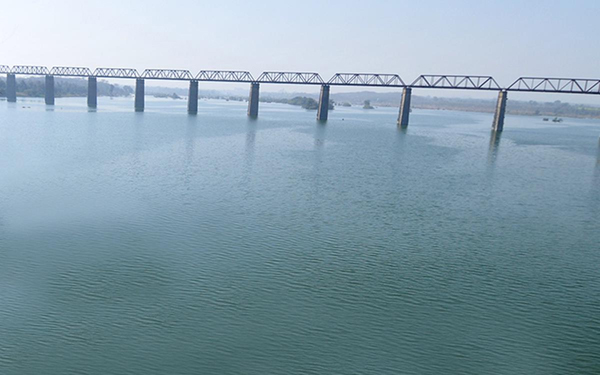 NEW DELHI, June 14:
Interlinking of rivers may have far-reaching adverse impact on monsoon cycles and biodiversity and pose socio-economic challenges, several experts have said, as the government embarks on an ambitious project to link the Ken and Betwa rivers to tackle water crisis in the parched Bundelkhand region.
The Ken-Betwa scheme, the first being implemented under the National River Linking Project (NRLP), seeks to bring nearly 11 lakh hectares of land under irrigation in the parched Bundelkhand region straddling Uttar Pradesh and Madhya Pradesh.
The NRLP proposes transfer of water from water-surplus basins where there is flooding to water-deficit basins where there is drought and scarcity through inter-basin water transfer projects.
Cautioning against river linking projects, the experts said these can lead to disturbance of very complex nature cycles that can have far-reaching adverse impact on monsoon cycles, biodiversity and socio-economic issues.
Manoj Misra, convenor of Yamuna Jiye Abhiyan, a collective fighting to preserve the Yamuna river and its floodplains, said the long-term adverse impacts of the river-linking projects cannot be visualised as they would be very far reaching.
“For example, in Ken-Betwa, their origins are very different. Ken has a very unique fish which has medicinal value and it is very specific to Ken and that is not found in Betwa currently. If Ken’s water is diverted to Betwa then fish and other biodiversity will also move and when it moves then you do not know what impact it will have on the local fish,” he told PTI.
He said river-linking projects can also lead to adverse impacts on the monsoon cycle. “When water of a river is diverted and it merges in sea, it takes all its sediments with it to the sea. It is a hypothesis that the kind of inter-linking we have planned is that for all we know the monsoonal systems may get impacted,” he said.
Himanshu Thakkar, working as coordinator of South Asia Network on Dams, Rivers and People (SANDRP), agrees with Misra and says sea’s thermal and salinity gradient are two drivers of monsoon which can get disturbed by river-linking projects.
“By river-linking, you are stopping flow of fresh water to sea and the salinity gradient is also reduced and the silt component which creates the Gangetic plain is also impacted. So that creates a different dynamic and all these are drivers of monsoon. So when you are disturbing these factors driving monsoon you are disrupting the monsoon season,” he said.
Speaking about other issues that the river linking projects can pose, he said there can be environment , social, climate-related impact.
“It will have biodiversity impact, impact on disasters, hydrological effects, a big impact is 23 lakh big trees will be cut for the Ken-Betwa inter-linking,” Thakkar said.
He said a credible assessment must be made on the impact of Ken-Betwa river linking project on the environment, as none exists today.
“The current EIA (Environmental Impact Assessment), the public hearing and the scrutiny by the Expert Appraisal Committee for the Ken Betwa project are all seriously flawed,” he said.
Manshi Ahser, a researcher-activist associated with Himachal Pradesh-based Himdhara Collective, said river linking is not a novel concept and was implemented way back in 1960s when the Beas-Sutlej were inter-linked for large-scale provision of water for irrigation and electricity.
“It has been seen that…You kill the river by diverting one river into another and this has been done for commercial extraction and now with climate change the discharge is reducing so inflow is going to reduce and it would create a lot more problems,” she said.
“River linking is not a new concept and we have seen its adverse impact, so we should have learnt our lessons from it,” she said.
Asher said if a river is diverted and storage structures are built they become problematic too because it would need land, spelling a disaster for farmers and the agriculture sector.
On the impact of the river linking process on the monsoon season, she said if the hydrological cycle is disrupted then it is a very complex cycles that is being disturbed.
“Also for biodiversity of fish and fauna and from socio-economic point of view there is a lot of impact of river-linking projects and with climatic change rivers and glaciers are undergoing a change so what is the point of putting so much concrete and making a mega structure to further worsen the situation,” she added.
Hydrological cycle or water cycle is how water evaporates from the surface of the earth, rises into the atmosphere, cools and condenses into rain or snow in clouds, and falls again to the surface as precipitation.
The water falling on land collects in rivers and lakes, soil, and porous layers of rock, and much of it flows back into the oceans, where it will once more evaporate. (PTI)