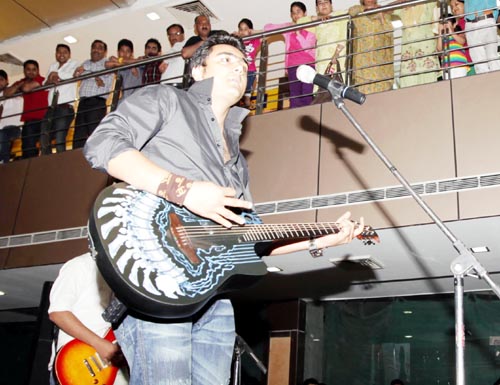 Rakesh Bakshi
Anmol Amla, the pride of Jammu, has been serenading the city with his magical voice and guitar for over 19 years. One of the most renowned performers of the state, he believes in radiating his best while on stage. His contributions in the field of music ranges from a plethora of live band performances to playback singing and composing. He has received numerous awards from various ministers and dignitaries including an award for his achievements in the field of music by Pandit Shiv Kumar Sharma. Apart from his on-stage adventures, Anmol has had several off-stage stints including: production management with Doordarshan for an event called ‘Aawoo Pehchaan Banayein’, event management for entities like City Square, assignments with the Times Group, ICCR, Indian Army and a number of commercial shows and brand promotion activities. When asked about his future plans, Anmol informed that he has recently ventured into the Punjab Music Industry and is all set to release his first album shortly. He will be working with biggies such as 9x Tashan and PTC. He is also going to delve deeper into the field of playback singing.
Also, Anmol is the director of Heritage Strings – School of Rock and plans to contribute more towards the appreciation of music among the youth through this channel. In an interview with the All India Radio, Anmol spoke at length about his childhood and love for music and about how his little gigs at the school and college brought him this far. Smiling, he reminisced how he had started learning guitar in the second standard, never knowing what melody the discordant chords of that innocent age will culminate into. His belonging to a business family did line up hurdles in his learning music, but his perseverance paid off in the long run when a visible fruit in the shape of a huge fan following erased all impediments in his way. He began considering music as his profession during his MBA years, starting off as a vocalist and a guitarist with the famous Aspiration Band and later on formed ‘Anmol Amla and the Band’. The group has been performing at various live events across India, including several colleges and institutes of repute and has been scaling heights since its inception. Anmol alone has a wide audience, holding thousands of fans captives to his charm. Although he does not believe in role models, he credits his music teacher, Vikas Nagar for introducing him to this world and for refining his talent. An MBA, he has a way with his words and is a wonderful sport when it comes to supporting a cause, like the mega charity events with ALSAJ for the flash flood victims of Ladakh, a charitable musical eve for the children of SOS village and the latest event ‘Spreading Smiles’ for the orphans of Bal Niketan.
Anmol has also been playing a vital role in the promotion of Dogri language in the state by ensuring the inclusion of Dogri songs in all his performances. Recently, he performed an all-Dogri show for Central Government Employee Welfare Coordination Committee, Jammu wherein he paid tribute to the famous Mallika Pukhraj by singing songs like Albelua Ho, Kanak Mandi Da Tanga, tare tuda piyein among others. Anmol’s performance received a standing ovation and was commended as being a perfect fusion of the new and the old. Many patrons have begun referring to him as the ‘Father of Dogri Rock’. Anmol is credited with renewing the love for this sweet language amongst the youth of Jammu.
The rockstar has been involved in many other events in line with the cultural advancement of Jammu and Kashmir. His message to the youth is to never give up on dreams howsoever difficult they may seem. He urges the youth to be original and to have faith, both in themselves and in God. He believes in being positive and suggests the same to his followers. The future appears bright for this star that has already risen and the day is not far when this son of our soil will bring us laurels from every nook and corner in the world.