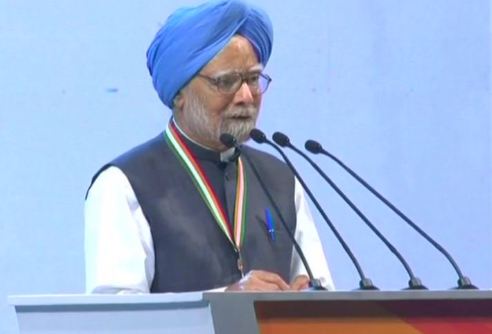 NEW DELHI: The resurgence of “nativism and protectionism” in the West is a disturbing phenomenon and there is a need for thinking afresh while building goodwill and peace among nations, former Prime Minister Manmohan Singh said today.

Singh, while addressing the gathering at the the launch of former Union Minister S Jaipal Reddy’s book ‘Ten Ideologies: The Great Asymmetry between Agrarianism and Industrialism’ here, noted that during the course of the last three centuries, the industrial revolution had become a “full blown global phenomenon”.

“I am happy to note that Shri Jaipal Reddy is trying to build a new approach to meet the current crisis in the world, this is what we should focus on. The resurgence of nativism and protectionism in the West are disturbing phenomenons. Old and tried approaches may not suffice,” Singh said.

“We should not hesitate to think afresh. While doing so, the paramount thing is to build goodwill and peace among nations,” he said.

The former Prime Minister noted that the conflict of mindsets of agrarian and industrial eras that Reddy has focussed upon in his book were highly relevant. (AGENCIES)