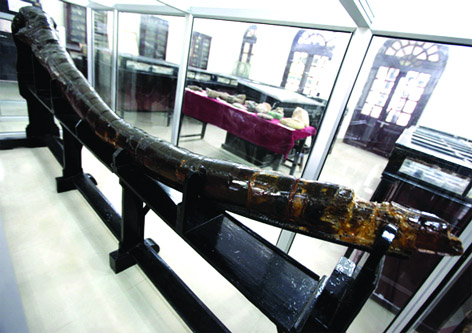 Siddharth Bhardwaj
Located in the heart of Jammu city, PG Geology Department of GGM Science
college is a hidden treasure of Geological heritage of J&K.The Geology Department was set up
in 1907 by DN Wadia when he was serving as Lecturer in GGM Science college Jammu. DN Wadia was a pioneering geologist in India and among the first Indian scientists to
work in the Geological Survey of India. He is also awarded with Padma Bhushan
and various other Honours and Awards.
The department is the second oldest in India, the first being at Presidency College in Kolkata, India. The geology department library contains about 200 rare books and journals of late 19th and 20th century and the oldest journal dates back to 1862.The teaching of Geology was started in the department in 1907.The Geology museum of this department is one of the oldest specialist geological museum in India.
The department has collection of about more than 3000-4000 specimens of rocks, minerals, fossilsetc. The major attraction of this department is the fossilised tusk of Elephas Ganesa (Stegodon Ganesa) which belongs to an extinct relative of the present-day Elephant.
The 11 foot 3 inches long tusk was discovered in the Jagti Hills in Nagrota by DN Wadia and this discovery was published in records of the Geological survey of India in 1924. This tusk is considered to be of Pliocene-Pleistocene age.
Besides, the museum houses shark Teeth, floating stones (pumice stones), other things of sea life etc are preserved there.
In 1951, a 2 Anna postage stamp illustrated Stegodon Ganesa was released to commemorate the centenary of Geological Survey of India. In 1984 an Indian postal stamp with a portrait of DN Wadia was issued forhis contribution to geological study in India.
The pictures of museum of this department are also displayed in Wadia Institute of Himalayan Geology Dehradun. Wadia Institute of Himalayan Geology is a pioneering and advanced institutionfor undertaking higher level of research in the country.
However, this department of Geology and geology as subject are highly neglected by all centre and state governments. This treasure of geology is known to only a few people of state. The UGC plans to provide funds to convert this department into the Wadia Museum of Geology.
The PG department of geology GGM science Jammu has produced various IAS, Professors, Geoscientists etc. It’s a request to J&K government to make provisions for the restoration of this geological heritage of J&K.
(The author is Semester 4th Student of PG department of
Geology GGM Science Jammu)