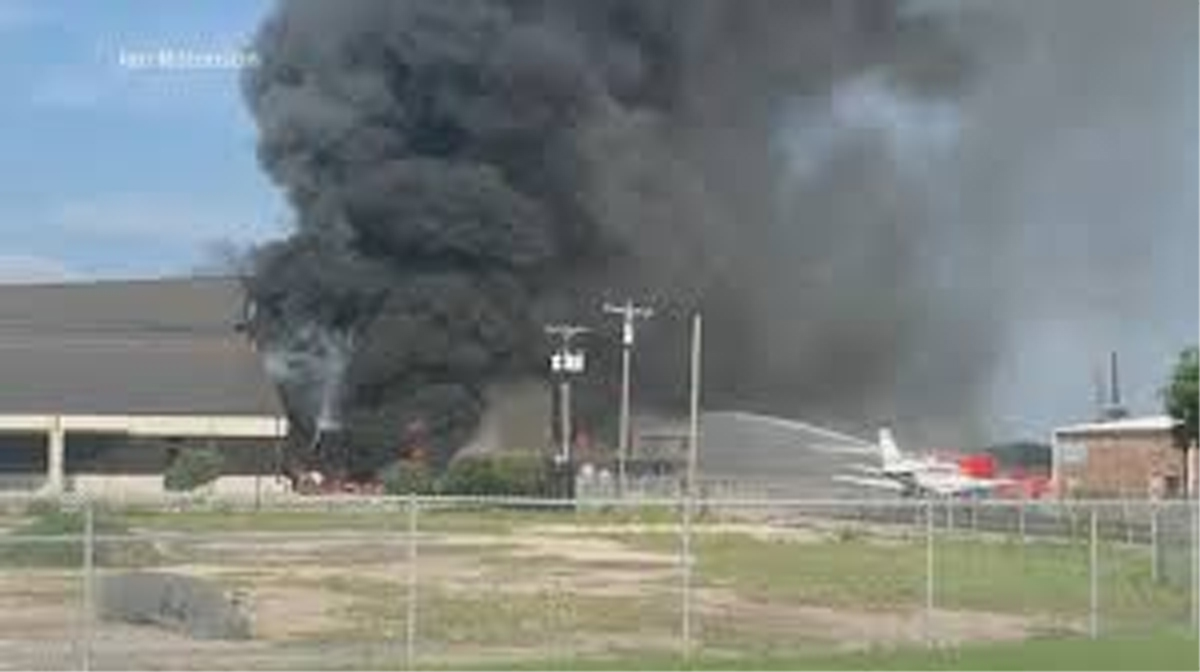 DALLAS (US), July 2: Federal investigators said Monday that they have started analysing the cockpit voice recorder from a small plane that struck a hangar after taking off from a suburban Dallas airport, and local officials have released the names of six of the 10 people killed in the fiery crash.

Jenkins said in a tweeted statement that the names of the other victims would be released after officials identified their remains and informed their families.

Meanwhile, the Catholic Diocese of Dallas identified a sixth victim as Ornella Ellard.

The diocese said the woman was the mother of Alice and Dylan Maritato, and that the teens attended area Roman Catholic schools.

It said Brian Ellard was the teens\’ stepfather.

The plane was scheduled to fly to St. Petersburg, Florida. Witnesses and local authorities said the aircraft struggled to gain altitude then veered into the hangar not far from a busy commercial strip and densely populated residential neighbourhoods.

National Transportation Safety Board officials said at a news conference Monday afternoon that the cockpit voice recorder was being analyzed at the board\’s laboratory in Washington.

The private plane was not required to have a flight data recorder, a device that tracks the performance of virtually every system on board.

The fire was so intense that investigators only know that the landing wheels were still in their down position when the plane struck the hangar. The rest of the craft was destroyed.

Without a flight data recorder and with little of the plane remaining, NTSB investigators will rely on physical evidence at the crash site, videos, radar information and witness accounts to determine the cause of the crash.

“NTSB has been doing accident analysis for a very long time, and usually we can get pretty close,” said board Vice Chairman Bruce Landsberg.

Todd DeSimone, the general manager of Chicago-based jet charter company Planemasters, said Monday that he sold the plane to a company based in Addison called EE Operations.

No one has responded to a message left at a phone number associated with EE Operations.

The company\’s agent in Delaware, where EE Operations is registered, said it would forward a request for comment.

The FAA registry confirmed that the plane was registered to EE Operations.

The pilots used the plane\’s previous tail number in radio communications Sunday and for the flight plan, said Lunsford, who added that questions about why they were using the old number would be addressed in the investigation.

Edward Martelle, a spokesman for the town of Addison, said the plane was taking off at the south end of the airport and had just lifted off the runway when it veered left, dropped its left wing and went into the hangar.

David Snell, who was getting ready to fly from Addison with a friend Sunday morning, told KDFW-TV that the plane didn\’t sound right on takeoff.

“It looked like it was clearly reduced power. I didn\’t know if it was on purpose or not, but then, when the plane started to veer to the left, you could tell it couldn\’t climb.

Air-traffic control tower audio from around the time of the crash does not capture any pilot indicating an emergency or trouble with a plane. But pilots waiting to take off soon thereafter can be heard seeking updates and being told repeatedly to wait.

The plane went down a week after another fatal crash involving a Beechcraft King Air.

On June 21, a different model crashed shortly after takeoff in Hawaii, killing 11 people in the deadliest civil aviation accident since 2011.

The skydiving plane also rolled to one side just after takeoff. It became inverted and crashed a short distance from the runway, the NTSB said. It was engulfed in flames and everyone on board died.

Although the registered owner remained the same, the aircraft had recently relocated to Hawaii after it was involved in a 2016 accident in California that left it with significant damage.

Landsberg said the NTSB is not in a position to make any comparisons between the two crashes yet.

“They\’re different types of aircraft and we take each accident on its own,” Landsberg said.

“Obviously at some point there might be further analysis of various makes and models, but these are two completely different models.”

Textron Aviation, the manufacturer of Beechcraft planes, is working with the NTSB in the agency\’s investigation of the Addison crash and is prohibited from offering further comment, company spokeswoman Stephanie Harder said Monday.

Lunsford, the FAA spokesman, said “it\’s still too early to draw any conclusions about any apparent similarities between this accident and any others.”

While officials said they were examining records for the pilots involved in the Texas crash and the plane\’s maintenance, they did not give any information on either.

The plane was 2 years old and would have undergone two annual inspections, Landsberg said. (AGENCIES)
&&&