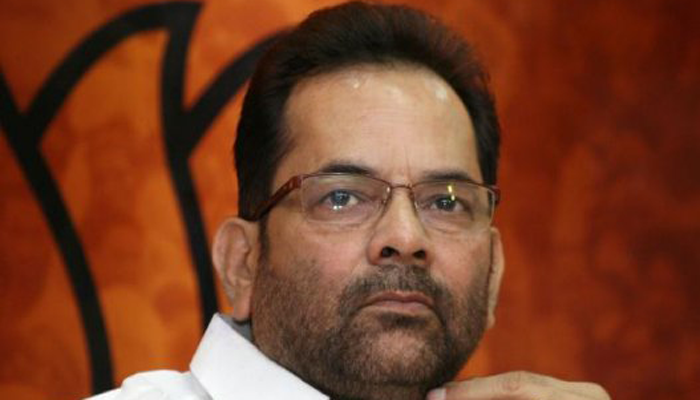 NEW DELHI: Union Minority Affairs Minister Mukhtar Abbas Naqvi said here on Saturday that for the first time after Independence, record 1,75,025 Muslims from India are going to Haj this year, including more than 47 per cent female pilgrims.
Mr Naqvi said even after ending the Haj subsidy, Rs 57 crore less will be paid to airlines this year for those Haj pilgrims, who are going through the Haj Committee of India. Addressing an Orientation-cum-Training camp for Haj Coordinators, Assistant Haj Officers, Haj Assistants and Medical personnel, Mr Naqvi said in 2017, a total of Rs 1,030 crore was paid to airlines for 1,24,852 Haj pilgrims’ airfare.
Whereas, in 2018, a total of Rs 973 crore will be paid to airlines for 1,28,702 pilgrims going through Haj Committee of India. Mr Naqvi said a total 3,55,604 applications had been received for Haj 2018, including 1,66,387 female applicants.
For the first time, 1,308 Muslim women from India are also going to Haj without ‘Mehram’ (male companion). In another first, choice of embarkation points has been given to Haj pilgrims, which has received an overwhelming response.
He said despite the removal of Haj subsidy and various new taxes imposed in Saudi Arabia, for the first time after the Independence, a record number of Muslims from India are going to Haj this year, that too without any additional financial burden.
The Minister said for the first time, such a large number of women Haj Coordinators, Haj Assistants and Khadim Ul Hujjaj, doctors and para-medics have been deployed in Saudi Arabia. A total of 98 female Assistant Haj Officers, Haj Assistants Haj Coordinators, doctors and para-medics have been deployed to assist the Haj pilgrims.
Mr Naqvi said a total of 6700 devotees will go from Ahmedabad, 350 from Aurangabad, 5550 from Bengaluru, 254 from Bhopal, 11,700 from Cochin, 4000 from Chennai, 19,000 from Delhi, 5140 from Gaya, 450 from Goa, 2950 from Guwahati, 7600 from Hyderabad, 5500 from Jaipur, 11,610 from Kolkata, 14,500 from Lucknow, 430 from Mangalore, 14,200 from Mumbai, 2800 from Nagpur, 2100 from Ranchi, 8950 from Srinagar and 3250 from Varanasi.
Flights for Haj will start from July 14, when pilgrims from Delhi, Gaya, Guwahati, Lucknow and Srinagar will go for Haj. On July 17, pilgrims alight from Kolkata; July 20 from Varanasi; July 21 from Mangalore; July 26 from Goa; July 29 from Aurangabad, Chennai, Mumbai and Nagpur; July 30 Ranchi; August 1 Ahmedabad, Bangalore, Cochin, Hyderabad and Jaipur and on August 3 pilgrims from Bhopal will go for Haj, according to an official spokesperson. (agencies)