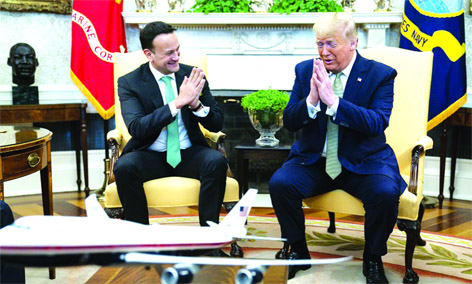 Kuldip Khajuria
Since December 19 when this corona virus was identified in
China, people everywhere are being urged to rethink, how
they greet each other. Presently, be it US president Donald
Trump, French president Emmanuel Macron, Israel Prime
Minister Benjamin Netanyahu or even Prince Charles,
everyone is adopting “ Namastey” to greet others as the
existing ways of greeting like shake hands, embrace, hugs
or kisses on the cheeks, rubbing nose are possible
contraction of corona virus. Benjamin Netanyahu who
is greatly inspired of Indian culture, was the first world
leader to publicly appeal to the world for adoption of
“Namastey” as way of greetings which is now going global
amid corona scare. This India’s traditional way of greeting
each other by saying Namastey with folded hands has gained
relevance in the developing countries, particularly among
their leaders.
Concept of Namastey
Folding hands together with a smile to greet, Namastey is a common cultural practice in whole India. Namastey or Namaskar or Namaskaram is a common verbal salutation in India. It is a customary greeting when one meets or takes leave of others. While saying Namastey, one commonly does this by a slight bow made with hands pressed together, palms touching and fingers pointed upwards, in front of the chest. It can also be done without words and carries the same meaning. Namastey is derived from Sanskrit and is combination of two words, namah: and te . Namah means bow, obeisence, reverential salutation’ or adoration and te means ‘to you’. Therefore, Namastey literally means ‘bow to you’, translated as, I bow to you.
Namastey is also a friendly greeting in written communication when the hand position is higher it usually means reverence and/or worship. The expression with hands placed on top of one’s head is usually the sign of utmost reverence or respect. The gesture Namastey represents and acknowledge the belief that there is a Divine speak within each of us. Hence, Namastey means I bow to you or the divine within me greets the divine in you. The gesture is widely used throughout Asia and beyond. It is also appeared 4000years ago on the clay seals of Indus valley civilization.
In Japan, the Namastey hand gesture is used in prayer and healing sessions and is called Gassho. Namstey is also in vogue in Sri Lankan and Nepalese culture. Sikhs also fold their hands in Namastey, but their greeting is SatshriAkal. In Bhutan, Burma, Thailand, Indonesia, Cambodia, the culture of Namastey already exists.
Coronavirus and Namastey
As already virus keeps spreading with, the WHO declared it a pandemic, the people are worried about social contact including gesture of meeting like hand shake etc. as it might spread the virus. The authorities in India as in Europe, have declared that people should avoid hand shaking to curb the spread of corona virus and adopt Indian culture- “Namastey”, as the Covid-19 infection can be transmitted through skin-skin contact.
In an effort to stop the spread of corona virus, more people including global leaders are using the Indian greeting Namastey. The French president Emmaneul Macron is even replacing the traditional handshake in his country, with Indian style Namastey. When everybody is scared of not to shake hands, embrace, hug or kiss here comes, into play the ‘Namastey’ which also ask you to maintain a distance of atleast a metre, and shower someone with your innermost feelings. Hence Namastey can never cause a contagion whereas the English greetings or other embracing can.
Prime Minister Narendera Modi, has promoted the Namastey, saying that the world is increasingly adopting the no-contact way of greeting as the people around the world particularly US president Donald Trump, Ireland Prime Minister Leo Varadkar , German Chancellor Angella Merkel, Portugese Prime Minister Antonio Costa and many more are worried that shaking hands, hugging etc might help spread the virus. And now they all are in the front foot to adopt this Indian culture of greeting Namastey- also like Yoga which is accepted by 190 countries across the world comprising 92% of the world population.
So I think that India fantasizing about being Vishavguru – the guru to the world- all the time, and with Corona virus, we got one step closer to that fantasy.
“Hence Namastey is in,
Handshakes and Hugs are out” 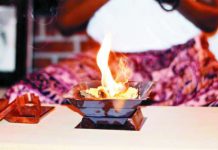