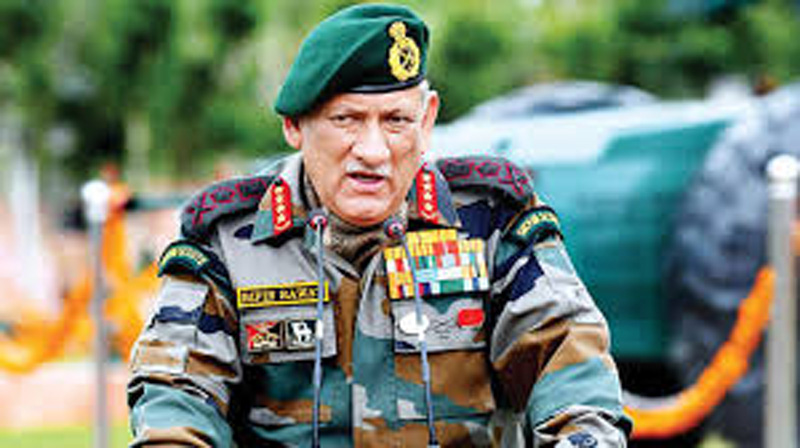 NEW DELHI, Dec 30:
Army chief Gen Bipin Rawat was today appointed India’s first Chief of Defence Staff with a mandate to bring in convergence in functioning of the Army, the Navy and the Indian Air Force and bolster the country’s military prowess.
His appointment to the newly created post came a day before he was due to retire following a three-year tenure as the Army Chief during which he initiated a series of reforms in the 1.3 million-strong force besides following a policy of “hot pursuit” in dealing with cross border terrorism in Jammu and Kashmir.
According to a government order, Gen Rawat has been appointed as the CDS with effect from December 31.
“Government has decided to appoint Gen Rawat as the Chief of Defence Staff with effect from December 31 and until further orders and extension in service of Gen Rawat with effect from December 31 and till the period he holds the office of CDS,” the defence ministry said.
Gen Rawat will be able to serve as CDS for a period of up to three years after the government amended the rules extending the age of retirement to 65 years.
The Cabinet Committee on Security had, in a landmark decision last week, approved the creation of the CDS who will act as the principal military adviser to the defence minister on all matters relating to tri-services.
A key mandate of the CDS will be to facilitate restructuring of military commands for optimal utilisation of resources by bringing about jointness in operations, including through establishment of joint/theatre commands.
Officials said bringing about jointness in logistics, transport, training, support services, communications, repairs and maintenance of the three services within three years will also be another major mandate of the CDS.
As the CDS, Gen Rawat will also helm the newly created department of military affairs.
The tri-service agencies, organisations and commands relating to cyber and space will be under the command of the CDS, and he will also function as the Military Adviser to the Nuclear Command Authority.
The CDS will also be member of Defence Acquisition Council chaired by the Defence Minister and Defence Planning Committee chaired by the NSA.
A high-level committee set up to examine the gaps in the country’s security system in the wake of the Kargil war in 1999 had called for appointment of a CDS as a single-point military adviser to the defence minister.
Prime Minister Narendra Modi had announced the creation of the CDS post in his Independence Day speech this year.
Gen. Rawat assumed charge as Chief of Army Staff on December 31, 2016. He was to retire on Tuesday from the service. Before becoming the Army Chief, he handled various operational responsibilities in many areas, including along the LoC with Pakistan, the LAC with China and in the Northeast.
Last week, Gen Bipin Rawat drew criticism from the opposition parties after he publicly criticised people leading protests over the new citizenship law, saying leadership is not about guiding masses to carry out arson and violence across the country.
There were also sharp reactions from activists and military veterans who accused him of making political remarks, thereby compromising the long-held convention in the Army of not wading into political matters.
In his three-year tenure as Army Chief, he has faced allegations of not remaining politically neutral.
An alumnus of St Edward School, Shimla, and the National Defence Academy, Khadakwasla, he was commissioned into the 11th Gorkha Rifles of the Indian Army in December 1978.
He has has vast experience in operations across a wide spectrum of conflict and terrain profiles.
He commanded an Infantry battalion along the Line of Actual Control in the Eastern Sector, an Infantry Division in the Kashmir Valley, and a Corps in the North East.
He had also commanded a multinational brigade in the Democratic Republic of Congo (MONUC).
Gen Rawat is a graduate of the Defence Services Staff College, Wellington, the Higher Command and National Defence College courses and, has attended the Command and General Staff Course at Fort Leavenworth, the US.
Indian Army congratulated Gen Rawat on being appointed as the first Chief of the Defence Staff. “It is a proud & historical moment. The appointment would bring in enhanced #Synergy #Jointness #Interoperability in the Armed forces,” the Army tweeted. (PTI)