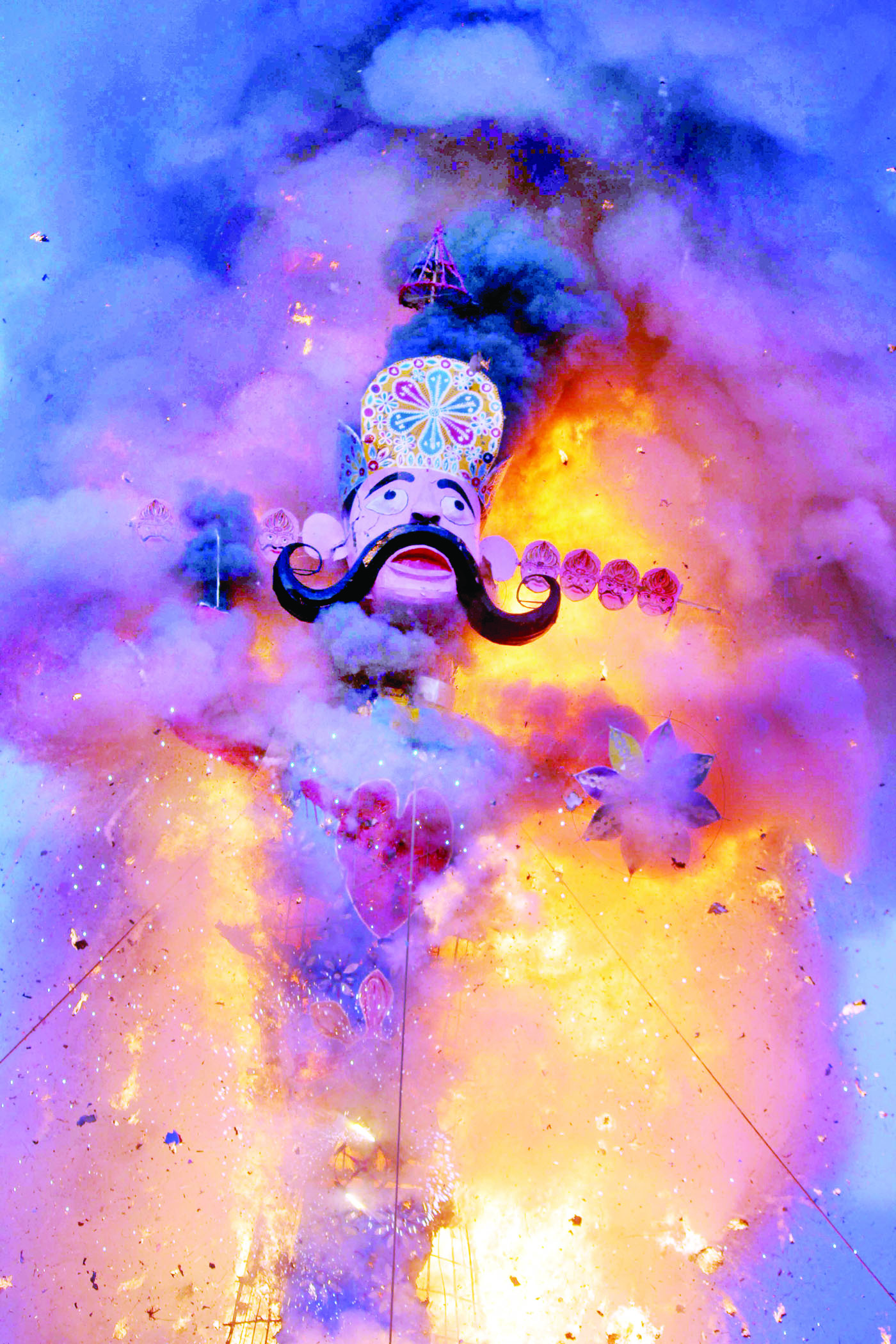 Mehak Gupta Grover
Vijayadashami also known as Dussehra or Dashain is a major Hindu festival celebrated at the end of Navaratri every year. Vijayadashami is observed for different reasons and celebrated differently in various parts of South Asia. In the southern, eastern and northeastern states, Vijayadashami marks the end of Durga Puja, remembering goddess Durga’s victory over the buffalo demon Mahishasura to restore and protect dharma. In the northern, central and western states, the festival is synonymously called Dussehra – remembering God Rama’s victory over Ravan. On the very same occasion, Arjuna alone decimated more than 100,000 soldiers and defeated all Kuru warriors including Bhishma, Drona, Ashwatthama, Karna and Kripa, a significant example of victory of good (Dharma) over evil (Adharma).
Dussehra- festival of the victory of good over evil. It signifies that wrong doings come in front of everyone. Truth and righteousness always win. Ravan dahan is the practice of burning the effigy of Ravan. Giant effigies of ten-headed demon king Ravana, his son Meghnad and brother Kumbhakaran goes up in flames on Dussehra marking the triumph of good over evil every year.
Dussehra stands for dus (ten) and hara (conquer). Ravana is shown as a demon with 10 heads. So, Dussehra symbolises the conquest of 10 vices. It is said the ten heads symbolizes six shastras and four vedas of the created beings namely Kama (lust), Krodha (anger), Lobha (greed), Moha (attachment), Madha (arrogance), Matsarya (hatred and jealousy), Manas (mind), Buddhi (intellect), chitta (consciousness) and ahamkara (ego).One must understand that we would be able to celebrate true Dussehra only when all human beings become pure – when all the above vices are eliminated from human minds and Ravana, the symbolic evil, is defeated forever.
Burning effigies of Ravan is more about our internal war with our own mind moving towards Ravan and our constant struggle to bring it towards the path of Ram. But, why only by burning the effigy every year? Why punishing the real rapists is not important? The one who kidnapped a woman is set on fire every year and the real demons are moving free in the society with their head held high! Why burn crackers and lead to air pollution which is way more harmful?
Even as Durga Puja brings with it happiness, joy and celebrations, it also causes great environmental concerns to the enlightened citizens as immersion of hundreds of idols in the Ganga does not only pollute the river but also cause several diseases to the people using its water. Till a few decades back, idols were made of clay and decorated with vegetable colours and other biodegradable material. Now idols are made of plaster of Paris and synthetic colours and are decorated with non-biodegradable materials that are not at all friendly to the river.
While spending five days offering prayers to idols of Goddess Durga and hopping pandals during Durga Puja every year, the immersion of these statues in natural water bodies at the end of the festivities does not signify its worshiping. Its religious significance lies in representing Durga’s safe return to her husband, Shiva. Yet, in terms of environment and urban governance, it means dumping hundreds and thousands of statues in the rivers and seas, only to pollute and suffocate them.
After witnessing the kind of criminals or evil-minded people that we have in our society, the one question that continuously torments me is – who is the real demon?
In today’s time, why do we still have to use Ravana as metaphor of evil? Criminals especially like rapists have surpassed every possible limit of immortality. So instead of burning Ravana’s effigy, why not burn an effigy of a real criminal who has committed more brutal crimes and is still not punished enough to set an example for others to remember for years to come.
During the same time of the year, we are polluting the air as well as the water. Why we have to be so blind folded? Are we really teaching our future generation the significance of our past or pushing them towards a hazardous future? Think!
feedbackexcelsior@gmail.com

Build your Shikaras of life

The way forward with President Trump