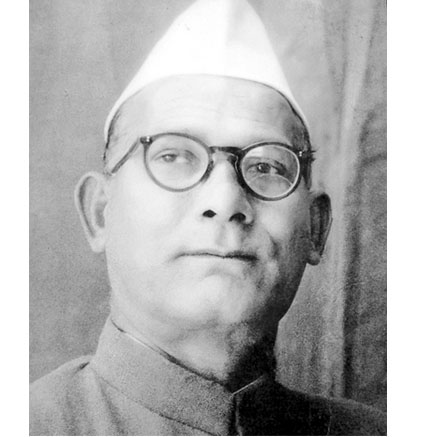 Rachna Vinod
24thJune1924 became an important memorable day in the history of Jammu and Kashmir when the first regular issue of weekly newspaper in Urdu, ‘Ranbir ‘ meaning ‘the knight of battlefield’ made its appearance laying the foundation of journalism in Jammu and Kashmir by Lala Mulk Raj Saraf who in later years came to be known rightly as the Father of Journalism in Jammu & Kashmir. It requires lot of determination for any great visionary for a better future of coming generations, to face the challenges of the present.
Impressed and inspired by the powerful personality of Lala Lajpat Rai, the Lion of the Punjab and working with him in his famous daily newspaper Vande Matram, then young Lala Mulk Raj Saraf was time and again reminded of helplessness of the people in his own state.Jammu & Kashmir where in spite of being so vast, there was not even a single newspaper. After much discussions with his friends and elders about his ambition of starting a newspaper, finally an application to His Highness Maharaja Pratap Singh for permission to start a weekly newspaper and to set up a printing press in Jammu for that purpose, was made on Chet 9 Samvat 1977 corresponding to March 22. 1921. Under the Press Law in vogue in the State in those days, only the Ruler, and no other authority, could grant such permission. When his application was put up before Maharaja Pratap Singh, he was personally highly delighted and in his own hand had remarked on the application, “Since the time of my forefathers there has been no newspaper in the State. My Chief Minister Dewan Sahib, who is also my trusted advisor, should advise me as to what to do or what not to do in the matter.” Amidst mixed advice of for and against starting the newspaper, Lala Mulk Raj Saraf was informed that the Durbar didn’t consider it advisable to entertain the application for starting a weekly journal at Jammu. Without getting discouraged, Lala Mulk Raj Saraf kept his spirits high and publicly voiced against the order and flayed it in the national press. On Baisakh 20, Samvat 1978 (May 21, 1921) , another application was made and a reply was given on July 5, 1921, ” His Highness the Maharaja Sahib Bahadur has ordered the starting of a newspaper in the State cannot be allowed.” Keeping his spirits high, on Baisakh 1, Samvat 1979 (April 13, 1922), an application was put up for the third time. However third application also met the same fate informing that His Highness the Maharaja Sahib Bahadur was not inclined to grant the required permission. 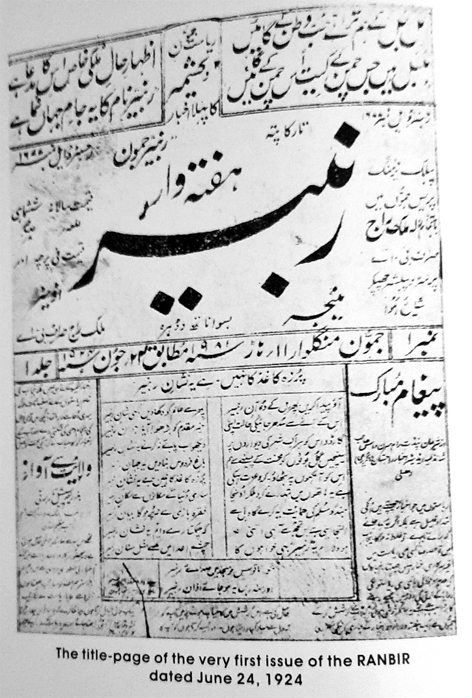 Luckily it was the heart-felt desire of Maharaja Pratap Singh to see a newspaper published in the State like those published in the Punjab. Then Raja Hari Singh, the Senior and Foreign Minister was also not opposed to it and Mr. Nagarkatti, an enlightened and liberal gentleman Minister of Commerce and Industries, holding Printing Department under him also gave his mind in favour. The forth application made on March 21, 1923 proved to be the last and the Maharaja affixed his Royal Seal on acceptance of the application after unanimously approved by the Council on March 18, 1924. Finally a letter dated March 28,1924 from Mr Nagarkatti, granting permission to start the newspaper in the State was issued. It read, ” With reference to your letter A/1748 dated 31st January,1924, I have the honour to inform you that His Highness the Maharaja Sahib Bahadur in Council has been pleased to accord permission under section 5 of the Jammu and Kashmir Press and Publications Regulations of 1971 Bikrmi to request that you will kindly take the necessary action in the matter according to provisions of the Jammu and Kashmir Press and Publications Regulations of 1971.” However it didn’t mention anything about the printing press. On approaching again, the very next day another letter informing”,…the permission already conveyed to you implies for starting a press also.” Thereafter, the State Council at its meeting in Srinagar on June 5, 1924, confirmed this reply of the Commerce and Industries Minister. Thus, after all, having passed through various stages spread over a period for more than three years, the permission to start the first newspaper from the Jammu and Kashmir State was obtained.
In the beginning the paper was to be named “Pahari” and the press “Dogra Press” but after further consideration the paper was named “Ranbir” and the press “Public Printing Press.” The newspaper title coincided with the name of the late Maharaja Ranbir Singh, son of Maharaja Gulab Singh who was the founder of the Jammu and Kashmir State, and father of the kind hearted and generous Maharaja Pratap Singh. But in reality “Ranbir” was “Ranvir” literally meaning “Knight of the battlefield” which true to its name, crossing all the hurdles made its debut as first newspaper in Jammu and Kashmir on 24th June, 1924.
In British India, Mahatma Gandhi, in pursuance of his civil disobedience movement, started the historic march to Dandi to break salt law on March 12,1930. It created a great stir in the whole country which led to his arrest which resulted in spontaneous hartals and processions throughout the country including Jammu. All these events, the unprecedented hartal and the biggest demonstration in the history of Jammu were reported in “Ranbir” resulting in ban of its publication. Fearless journalist Lala Mulk Raj Saraf started another newspaper ‘Amar’ from Lahore and then another ‘Mashir’ till Ranbir was permitted to re-appear after the lapse of more than 18 months on November 13,1931. It was on December 1,1946, the Ranbir was allowed to appear as a daily. 1946 was also the year which marked the centenary year of the Amritsar Treaty between the British India East Company and Maharaja Gulab Singh. The treaty laid the foundation of the State of Jammu and Kashmir. The Ranbir issued a voluminous special issue titled ” Jammu and Kashmir Encyclopaedia” which has been recognised as a document of great historical importance. Lala Mulk Raj Saraf brought out the first monthly magazine ‘Rattan’ for the children in December 1934. Soon it was regarded as one of the three best edited magazines of the country.
The torch bearers of journalism in present times, are grateful to the ‘Father of Journalism’ in Jammu and Kashmir, Lala Mulk Raj Saraf, a great visionary whose dauntless passion for free press with firm belief in freedom of expression has taken media to new horizons in Jammu and Kashmir.
(The author is trustee of JDGD Saraf Trust co-founded by Lala Mulk Raj Saraf and Om Prakash Saraf.)