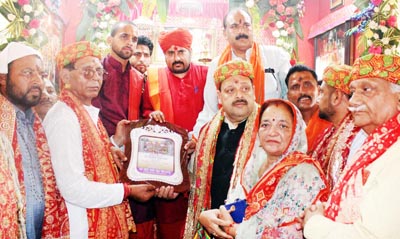 Excelsior Correspondent
NAGROTA, Apr 23: National Conference Provincial President Devender Singh Rana today called for massive infrastructural development of spiritual destinations, saying pilgrim tourism has opened up vistas of economic opportunities across the Jammu region.
“Like other pilgrim destinations, Chandi Mata also known as Machail Mata, has prominently emerged on the pilgrim tourism map of the Jammu region with number of devout thronging from various parts of the State and even outside Jammu and Kashmir to pay obeisance at highly revered temple surrounded by snow clad mountainous range of Paddar in Kishtwar at an altitude of 9,500 feet increasing every year”, Rana said while interacting with a large number of devotees at Chandi Mata Mandir Dhammi in Jagati on its Sthapana Diwas this afternoon.
The management of the Sarv Shakti Chandi Mata Mandir Committee presented memento to the Provincial President Rana, who represents Nagrota Constituency in Legislative Assembly. They included included Dr D.S.Jamwal, Chairman, Sanjay Gupta, Convenor, Sanjay Gandotra, President and Th Vikas Singh Jamwal, Senior Member.
Rana said religious tourism has proved boon for Jammu economy and during most turbulent times for over a decade in nineties Shri Mata Vaishno Devi Shrine sustained the economy of the Jammu region, as tourism influx dropped drastically due to disturbed conditions in the Valley. He said 24×7 yatra has given new dimension to the pilgrim tourism in Jammu and this has further expanded with opening up of pilgrimages to Shiv Khori, Chota Amarnath and now Chandail Mata.
The Provincial President sought adequate development and creation of infrastructural facilities for the visiting pilgrims in a time bound manner.
Dwelling upon the historic background of the temple, the various speakers of Sarv Shakti Chandi Mata Mandir referred to the legend, saying that Mata Chandi appeared in the form of Pindi, the same as it is in Mata Vaishno Devi. He said the pilgrims are getting spiritual bliss while embarking on the pilgrimage of Machail Wali Mata every year.