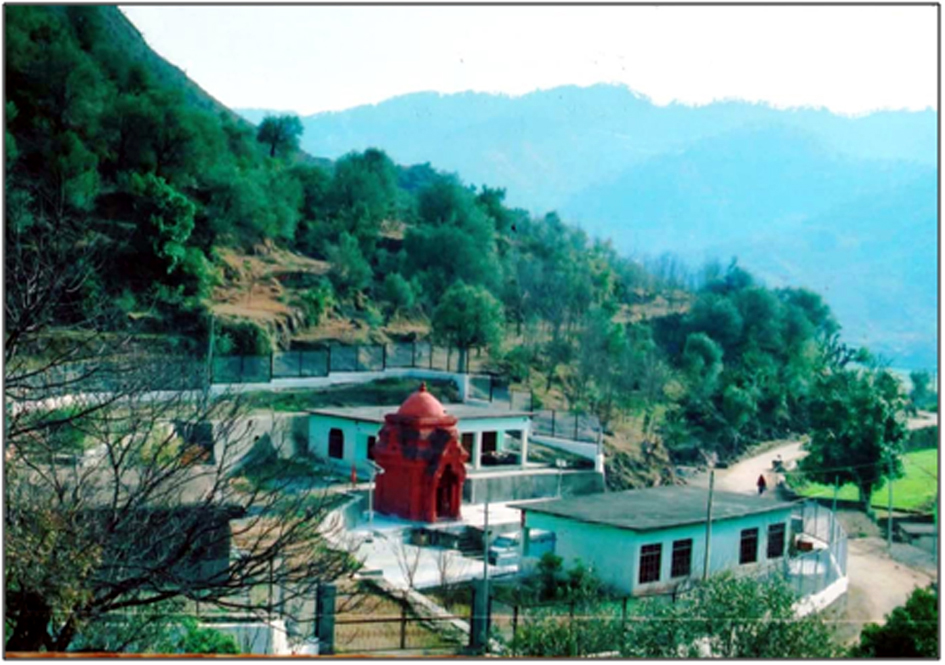 K.D Maini
Ramkund is the symbol of our ancient culture, art and traditions.  This is the oldest temple in Poonch region. As per the Archaeological report, this beautiful temple was built by Raja Lalitaditya (i.e. between 724 AD and 761 AD).  The style, architect and the age of the temple is the same as of those temples built by Raja Lalitaditya in Kashmir. This temple has a  very attractive look and a deep past from the religious point of view. It has remained out of sight due to locational disadvantages.  Now this old shrine is regaining its erstwhile status.
Ramkund temple is located at a sleepy village Narol of Mendhar tehsil, 62 kilometers from Poonch township.  This important religious place is located in a deep gorge at the foothills of Shah star Range of mountains from all sides.  At present, there are three sacred ponds apart from the ancient temple. They are known as Ram kund, Lachman Kund and Sita Kund. Ram Kund is the bigger in size (25′ X 25′), than Lachman Kund and  Sita Kund and a bit elevated from the other two. A spring water emerges exactly on the northern side of Ramkund. The water of this spring pours into Ram Kund which overflows to Lachman Kund and at last Sita Kund. The latter is the smallest in size. These kunds have been excavated in such a way that the water of spring after filling all the kunds flows out in nallah.  On the eastern side of Ramkund, there is a historical temple of 8th century.  A stone  stair case begins from the eastern side of  Ramkund upto the entrance of the temple.  At present, there is an idol of Hanuman which was installed in the temple in the recent past. On the northern side, a small structure houses the residence of  a Pujari and a cowshed. A ‘Kutiya’ has also been constructed near the temple for ‘Sadhus’ and pilgrims. The western side  of this Holy place is surrounded by banana trees and small garden of plums which gives this place look of an ‘Ashraam’.
A big religious congregation is held on 14th of ‘Chaitra (March) every year and is known as ‘Mela Chetar Chodas’. Devotees from all parts of Poonch and Rajouri districts participate in it.  People after taking a dip in the holy water or kunds offer prayers in the temple and take part in ‘Bhajan Kirtan’ organized by the ‘Mandlies’ (Groups). The religious programme continues for one full day.
As a  per Raj Tarangni of Kalhana there is a very interesting story behind the construction of this temple. Kalhana narrates that Raja Lalitaditya who was a great warrior and had converted Poonch town into Chawani (cantonment) of his forces and named this place as Purn-Utsva (with the passage of time, this name became Poonch. Kalhana writes that once Raja Lalitaditya  left for hunting in the jungle and reached this place in the evening. At this very solitary place, he saw in the nearby  a girl singing a devotional song while a beautiful girl was dancing in this uninhabited place. When the devotional song was over, both the girls bowed their heads at this place and left. The next day also the same thing happened.  Then Raja Lalitaditya came before these girls and enquired from them why they were dancing and singing their devotional song at such a lonely place in the jungle.  The girls replied that they were devdasis and doing so on the direction of their mothers and grand mothers. “This is our traditional job but we do not know the reason of our dancing at this place”. Raja thought that there might have been be a  sacred place in the past at that spot. Next day he ordered for the excavation of that particular place where the devdasis were offering prayer in the evening. After some excavation, two old temples came out on the surface from the earth whose doors were shut.  When  Raja opened the door, he saw that two idols of Keshav were installed there.  On the back of these idols, it was engraved that these idols were installed by Ramchander Ji during his visit to Kashmir.  Raja Lalitaditya took these idols to Kashmir along with him and he installed the idol of Ram Chander Ji in the temple of Vishnu Parihas in Parbaarspur, while the second idol was taken by the Queen and she installed it in Chakrshveri temple.
It appears that while taking the original idols from Ramkund temple, Raja Lalitaditya got renovated or reconstructed the original excavated monument with some additions and converted this place into an important religious shrine.  No doubt that Raja Lalitaditya had built Poonch city but at present, there is no such building existing on the ground.   This is the only temple in this region which indicates the construction of Lalitaditya in Poonch district.
Mr. Stein who translated  Rajtarangni visited Poonch in 1892 AD and identified number of places like Loharkote (Loran). Attalika (Atoli). Saramber (Chamber Kanari) Sawvernik (Surankote) mentioned in the Raj targani.  But he could not identify Ram kund Temple of Raja Lalita Ditaya’s time because this temple was located at a place which was far away from the main route leading towards Kashmir in those days.  All the habitants of this area were non-Hindus. Even most of the Hindus were knowing very little about this shrine in the past.
The other proof is the devdasis reported to Raja Lalitaditya that they belonged to a nearby village known as SoverDehmana at that time.  This village  still exists near Narol (where temple exists) and known as Dharana instead of  Dehmana.  Therefore, on the facts given above, it is clear that Ram Kund is the same temple which was excavated and reconstructed by Raja Lalita Ditya in 8th Century.