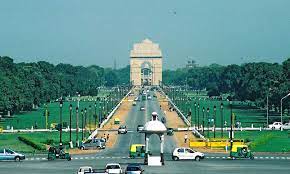 Slavery is a curse and very often it sprouts as a result of subjugation. Fighting slavery and getting riddance from it is in the very psyche of the ”enslaved” people particularly in matters of political freedom and individual liberty. History bears testimony to the fact that after getting freedom as a result of long drawn struggles and even offering sacrifices, those symbols, images, marks and signs connected directly or indirectly with imperial sway, must be erased. That is because of the fact that such signs keep constantly reminding and thus glorifying subjugation of natives even after attaining political freedom and even advancing economically. It is either a matter of too much of broadmindedness or a carefree approach demonstrated by this country towards such an issue of national pride that even after seven decades of our independence, there are still many symbols and marks standing reminding and being reminiscent of how the then Rulers had erected them in honour of the Kings and Queens in the name of whom they ruled India.
However, it is never late to make amends and changes and, therefore, Rajpath or Kingsway denoting Royalty and aristocracy of India’s alien Rulers now stands replaced by Kartaviya Path. As the very name ”Kartaviya”, however, denoting the important sense of “duty” ,an obligation and above all responsibility and “Path” the road to be treaded, brings with it not only a sense of having got riddance from an existing symbolic slavery but a commitment , a duty towards building this nation into a transformed power – economically as well as militarily and in cementing the bonds of togetherness of the citizens into one cohesive force. It may be fairly noted that merely rechristening roads and cities should not give an absolute sense of some satisfaction but the meaning and the aim behind such renaming needs to be noted in the right spirit.
Hence “Kartaviya ” denotes two way traffic – one for the Government to fulfil its committed duty on constant basis towards its citizens to lead a secured, prosperous and dignified life and the citizens fulfilling their duties towards the Government / the nation as enshrined in Article 51 A of the Constitution of India. Such duties of the citizens include, among others, about upholding and protecting the sovereignty, unity and integrity of India; safeguarding public property and abjure violence; defend the country and render national service when called upon to do so and the like.
The Prime Minister while inaugurating the revamped stretch of Rajpath with the new name and unveiling the statute of Netaji Bose at India Gate conveyed a message that the mindset of the bird born in a cage must not think that flying was any sign of illness but that we must cast off such a mindset . That referred to the Rajpath continuing to remind us even today that Indians were enslaved for centuries . The mindset had to be changed. Verily , therefore, he termed the revamping as a symbol of “slavery” of India having now been consigned to history. It is another thing that in a ”vibrant” democracy like that of India where freedom of expression and criticising are really exercised in unlimited measure hence from certain opposition parties Kartaviya Path was met with Virodh Path but that notwithstanding, the revamping is really a sign of India’s march towards self esteem .
While unveiling the statue of Netaji Subas Chandra Bose, the PM did not lose the opportunity to remind the citizens about the superb and unmatched role played by Netaji which rattled the British and shook them off their ground and wished that had India followed the path shown by the iconichero of the freedom struggle, in that case India would have reached new heights . How could we manage to have forgotten him and his symbols and ideas all these decades, PM Narendra Modi rightly wanted to ask. Still, if the”imprints” of his ideals and dreams are now ”visible ” in the present Government’s works, as claimed by the PM , it is a welcome step . By raising statues of iconic leaders like Netaji Bose and renaming Rajpath as Kartaviya Path like much needed obligations towards this nation on the whole, are carrying little sense, we are afraid, unless we get due inspiration , strength and guidance to feel more committed towards building this nation into a global power. Only then, can we defend our hard earned freedom, liberty and esteem as also preserve our rich heritage and culture .
A ”new vision for a great India ” as the PM put it, can only be developed with an ambition to see a different India of the future wherein innovation, reforms, changes, adopting and owning latest technologies, developing scientific tempers, shunning obsolete and worn out procedures that came in the way of performance and delivery of results were duly addressed . Nation needs to be constantly kept first , above all and at the top of priorities. Again ,sense of duties by the citizens is surely going to get a strength and a unique psychological boost as and whenever people visit such spots like the statue of Netaji , the National War Memorial and other spots of developing of our cultural infrastructure. This country, now committed to setting its own ideals, pledges and goals with stress on increased levels of self sufficiency is going to make a difference in matters of economic growth, resilience to fight challenges and increasing the levels and status of living of the citizens both in urban and rural areas.