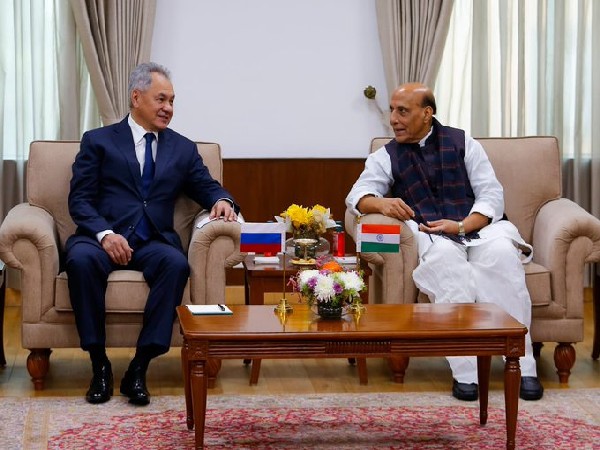 New Delhi, Dec 6: Defence Minister Rajnath Singh on Monday met Russian Defence Minister Sergey Shoigu here in Delhi ahead of the first 2+2 ministerial dialogue between India and Russia today.
Defence cooperation is an important pillar of the India-Russia strategic partnership, according to the Ministry of External Affairs (MEA). It is guided by the Programme for Military-Technical Cooperation signed between the two countries.
This pillar enshrines the interest of the two governments to further develop and strengthen the military and technical cooperation in the sphere of research and development, production and after-sales support of armament systems and various military equipment.
The two Defence Ministers meet annually, alternately in Russia and India, to discuss and review the status of ongoing projects and other issues of military-technical cooperation
Today, the two countries are expected to renew their military-technical cooperation arrangement for 2021-31.
The two ministers met at Sushma Swaraj Bhawan in New Delhi ahead of the first 2+2 ministerial dialogue. External Affairs Minister Dr S Jaishankar and his Russian counterpart Sergey Lavrov will also participate in the ministerial dialogue.
India and Russia in their first 2+2 format dialogue will discuss key bilateral, regional and international issues, including the situation in Afghanistan post-Taliban takeover, threats emanating from terror groups, protection of human rights of minorities, women and children in Afghanistan.
After the 2+2 dialogue, Russian President Vladimir Putin later in the day will hold the 21st annual India-Russia summit with Prime Minister Narendra Modi.
Both countries are expected to sign more than 10 agreements following annual talks between PM Modi and President Putin. These agreements will be in the fields of space, culture, science and technology, defence etc. (AGENCIES)