NEW DELHI: Union Home Minister Rajnath Singh will begin his two-day visit to Jammu and Kashmir on June 7 during which he will review the suspension of operations in Ramzan and also meet those affected by cross-border shelling, officials here said.

During his stay in Kashmir, the Home Minister will travel to the frontier district of Kupwara where he will review some projects being undertaken as part of the Border Area Development Programme, officials said.

Later, he will review the suspension of anti-militancy operations during the holy month of Ramzan with top police, paramilitary and central security agency officials, they said. (AGENCIES) 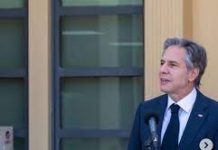