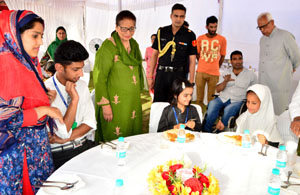 SRINAGAR, June 14: Governor N.N. Vohra and Usha Vohra, First Lady, organised a reception to host children and staff of the Deaf and Dumb School, Srinagar; Chotay Taray Foundation, Srinagar; and Humanity Welfare Organisation, Bijbehara, at the Raj Bhavan. Muhammad Iqbal Lone, Commissioner for Persons with Disabilities, was also invited to participate in the programme.
Governor and First Lady interacted with about 100 children and ensured that all the boys and girls enjoyed the savouries which were served to them. Governor discussed with the heads of the three NGOs and Lone the serious impediments faced by the specially-abled children and what requires to be done to support the valuable work which is being done by the NGOs.
The heads of NGOs apprised the Governor about the serious administrative and financial difficulties being faced by their organisations. Governor stressed the crucial importance of the required interventions to equip and enable the specially-abled children to be able to stand on their own and face the challenges ahead.
Governor was pleased to hear from Lone about the various steps which had been recently been taken by the Social Welfare Department for alleviating the lot of physically challenged persons.
While lauding the missionary work being done by the various NGOs, Governor observed that he shall shortly have another meeting with  Sajjad Lone, Minister for Social Welfare, to review the actions already taken on the decisions taken in Governor’s earlier meeting with the Minister and how the remainder issues can be settled very early.