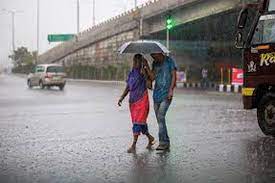 Only a few days ago, through these columns, we voiced our concern over the main river flowing through Kashmir valley, the Veth or Jehlum having touched all the low of the previous 65 years of its levels of water flow so much so that near drought like situation had emerged necessitating for installation of draught pumps for irrigation purposes . It all happened on account of a long hot dry spell as also due to less snow fall having taken place last winter . In respect of Jammu region , an unprecedented heat wave for more than three weeks brought in its wake untold discomfitures to people besides causing water and power related problems. However rains “came” but with associated usual problems in Jammu and Kashmir. A nomad got killed and several others got injured on account of striking of lightening while they were grazing their sheep in the open and were never expecting such a sudden turn in the weather conditions. Many houses and cattle sheds etc were washed away. However, loss of property due to the sudden fury of the nature due to thunderstorm, torrential rains, lightening and flash floods is yet to be ascertained fully as presently the administration caught unawares , if not napping and not appearing to have been prepared to face such an unforeseen natural disturbances, is busy in managing to mitigate the after effects of heavy rains on the affected people across Jammu and Kashmir .
Under these circumstances over which except the nature, none has any sort of control , an early rainfall for at least a few hours was what everyone longed for since whatever nature ”does” and not felt favourable and conducive to us in many ways , solutions too come from this very nature. Rains came to everyone’s respite in Jammu and Kashmir but these rains in torrents in a few places also turned into a nightmarish experience for the people most of whom never expected as at several places flash floods , landslides, blocking of roads and disruptions in movement of usual traffic took out of the gear the usual normal activities. Unusual and even untimely snowfall in upper reaches of Jammu region like in Sinthan Top in Kishtwar district brought in its wake its own train of difficulties for the people . Jammu had the day’s lowest temperature on June 21 when it fell 13.5 below the normal levels and people really felt the cold like situation as experienced in February of the year when only two days ago the region was reeling under a heat wave. Sheshnag on way to Holy Amarnath Shrine in Kashmir had a snowfall which is , however, not common this season of the year . Not only this, floods in many parts of Srinagar itself especially in low lying areas created havoc like conditions when people recalled the horrors of 2014 floods. Torrential and sudden rains not only resulted in River Jehlum touching the danger mark but various Nallahs and streams too were overflowing.
Vehicles plying on the National Highway on both the opposite sides were caught unawares and due to landslides at dozens of places got stranded in hundreds of them. Even the Mughal Road which is connecting with South Kashmir’ Shopian district, Jammu region’s Poonch and Rajouri districts and otherwise believed to be comparatively less vulnerable to the vagaries and furies of nature as compared to the Jammu-Srinagar National Highway, too remained blocked for three days. Doda, Kishtwar and Ramban in Jammu Region were worst affected where at several places people trapped had to be evacuated especially from snow bound areas. Several pilgrims on way to or returning from Mahour – Kouser Nag got stuck up en-route and to trace and rescue them , teams of police and Army are on the job. Not only this, several nomads who usually keep moving about from one to the other place for grazing purposes of their cattle along were trapped in sudden snowfall at various places along with their flock of sheep and goats in upper mountainous areas of Jammu region.
Sudden but heavy rains caused Rivers Chenab and Tawi to be in a state of spate and at several places the flow of water was touching the danger mark leading the authorities sounding an alert and cautioning people around the affected areas to be vigilant and restrict their movements. Drilling equipment and machinery otherwise required on the hilly and vulnerable patches en-route the National Highway are reported to have been damaged which indicates the intensity of the natural fury. Interesting thing to be observed all about the unexpected turn of events on account of heavy rains , thunderstorms, heavy snow fall , hailstorms is that the nature looks to be undergoing peculiar changes. What are the factors that are contributing to such an unexpected telling effect on the normal life and usual activities, we have to seriously look into. It is not merely an administrative problem which can at best be held accountable for certain lapses and shortcomings in handling post rains caused disaster.
Unplanned and haphazardly done urbanisation and erecting concrete jungles have left very little land for rains to get absorbed and deposited into the water table. Our mountains and hills are barren and shorn of even a blade of grass at many places. Extreme weather conditions occurring due to which precise reasons may well be explained by the experts but in common parlance intense and sudden rainfalls saturate and loosen soil particles , weaken slope resistance and trigger landslides which could be prevented had the hills and the mountains along the National Highway been full of trees and grass . However, in the meantime, the UT administration must employ all means to address the emerged problems out of the recent sudden rainfall and provide necessary relief to the affected people.