AMETHI (UP): Union Minister Smriti Irani on Wednesday slammed Congress leader Rahul Gandhi over his remarks on Jammu and Kashmir, claiming he cared little for the tricolour and is liked by Pakistan.

Irani’s criticism came hours after the Congress leader hit out at Islamabad for instigating violence in Jammu and Kashmir, his remarks being seen by the Opposition as a damage control exercise following reports that Pakistan had cited him in a petition to the United Nations.

“It is not for the first time that Pakistan is finding support from Rahul Gandhi,” the Women and Child Development Minister said during a visit to the constituency she wrested from the Congress leader in the recent Lok Sabha elections. (AGENCIES) 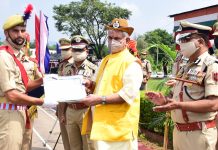