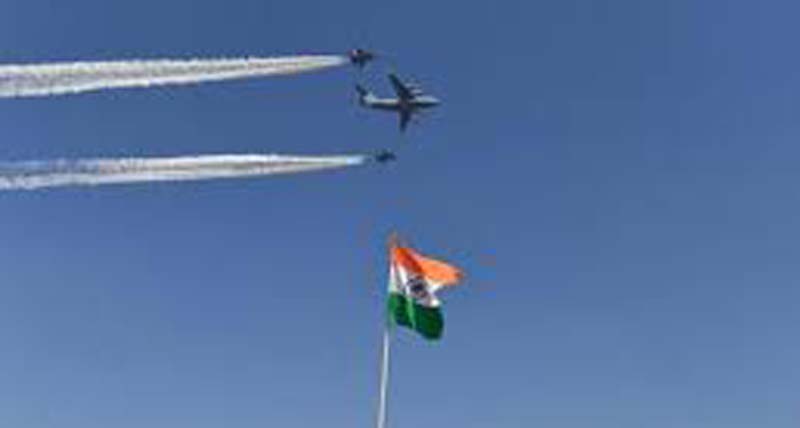 NEW DELHI, Jan 18: Ahead of Republic Day, the Delhi-National Capital Region has been put under a “very high-security” cover after police received inputs from Intelligence agencies about a possible terror attack, officials said on Tuesday.
Operation of sub-conventional aerial platforms, including UAVs, paragliders and hot air balloons, over the national capital has been prohibited in the city from January 20 in view of Republic Day celebrations, according to a Delhi Police order issued on Tuesday.
The order shall come into force from January 20 and remain in effect till February 15.
The order has been issued by Delhi Police Commissioner Rakesh Asthana in the wake of reports of the possibility of certain criminal or anti-social elements or terrorists posing a threat to the safety of the general public, dignitaries and vital installations, it said.
Deputy Commissioner of Police (New Delhi) Deepak Yadav said in view of Republic Day, the security has been tightened with the entire area where the celebration would take place being placed under multiple CCTVs fitted with facial recognition software.
All units of the Delhi Police, including local police, Special Cell, Special Branch, Traffic, SWAT (all-woman Special Weapons and Tactics) and teams from the National Security Guard will also be part of deployment besides the paramilitary forces, he said.
“Anti-drone arrangement systems have been put up at two different locations. Police personnel will also be deployed on high rise buildings for extra vigil. There’s also an air defence gun to keep a watch and tackle any hostile aircraft,” the DCP said. “Only those who are completely vaccinated will be allowed to attend the event. No children are allowed. Around 14,000 invitees have been allowed this year out of which around 4,000 tickets have been issued for public,” the officer added. Patrolling teams along with PRAKHAR vans with attached cameras will also be part of the security wing, he said.
According to Delhi Police, there is a three-layered security system in place and the force is always alert and undertakes anti-terror measures especially ahead of any event of national importance.
“We are focusing on anti-terror and sabotage activities. Although, it is a usual protocol, we do it especially ahead of any event of national importance. With the upcoming Republic Day event, we have intensified our activities and deployed extra manpower,” another senior police officer said.
Citing the recent security breach of Prime Minister Modi’s convoy in Punjab, the Delhi Police officers said that the force is extra vigilant to ensure no such incident happens in the national capital.
“As the prime minister’s security is of paramount importance, we have intensified our vigil and deployed extra manpower to ensure no such (Punjab) incident is repeated. We have also received intelligence inputs that there are chances of a possible terror or drone attack,” the officer said.
In the wake of the recent drone attack in Abu Dhabi in which two Indians and a Pakistani national were killed as well as the recovery of IEDs in Punjab and Ghazipur, the possibility of a threat to the prime minister cannot be ruled out, the officer added. (PTI)
Meanwhile, the personnel have been asked to ensure Covid-appropriate behaviour and follow all guidelines while ensuring there is no compromise on the security aspect, police said.
The Republic Day celebrations will now begin every year from January 23 instead of January 24 to include the birth anniversary of freedom fighter Subash Chandra Bose, government sources said on Saturday.
This is in line with the Modi government’s focus on commemorating important aspects of India’s history and culture, they said, noting it had earlier started celebrating Bose’s birth anniversary as ‘Parakram Divas’. (PTI)