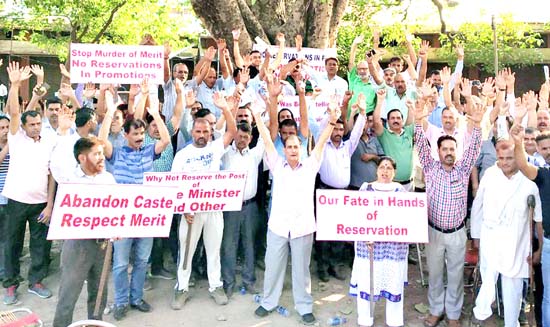 Excelsior Correspondent
JAMMU, June 20: Joint Action Committee (General Category), JKGCWF and Aarakshan Virodhi Manch today jointly held a protest here at Exhibition Ground against the circular issued by Central Government asking states to implement reservation in promotions.
Ved Prakash Sharma, convener JAC strongly condemned the Modi Government for issuance of this circular, saying it was illegal and unconstitutional to grant reservation in promotions without following laid down law.
“The directions of Central Government are murder of merit and seniority, and will muzzle the right to equality and justice. The circular issued by Central Government is political in nature and far from premises of law and justice”, he said while addressing the protestors.
“The matter being sub-judice in Supreme Court has been swept away by an illegal circular of Central Government which seeks to sideline the Rule of law pertaining to the reservation in promotions”, the protesting people said, adding, orders of Supreme Court have been mis-represented and soon this illegal circular shall be quashed by the court.
Madan Lal Narad of AVM said that the Modi Government is hell bent to electoral favours on the basis of reservations on caste ignoring the economic criteria. “The poor among all categories irrespective of caste, colour and creed should be given one time reservation. The present reservation system is on helping the creamy layer among the Scheduled Caste and Scheduled Tribe categories”, he added.
Anil Gour, general secretary (org) said that the JAC seeks to impress upon all political parties and leaders and specially those occupying constitutional positions to desist from such approach and allow the law to take its course.
A similar protest led by Salim Bandey (convener, JAC Poonch) was held at Poonch.

BJP will form next Govt in J&K: Raina