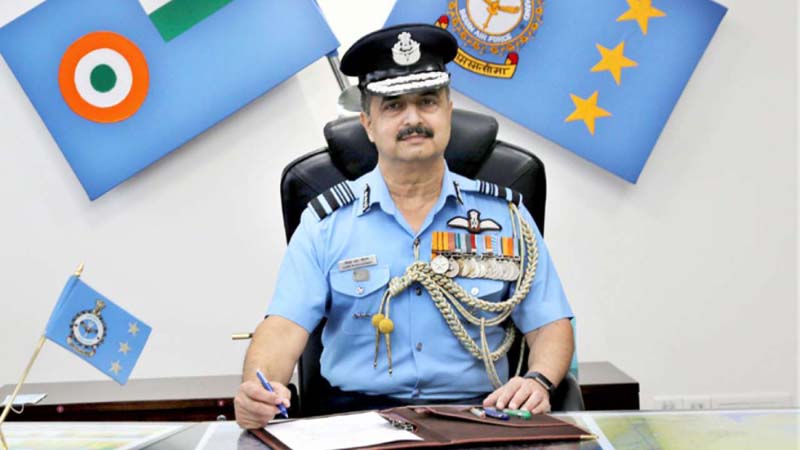 HINTON (UP), Oct 8: The IAF’s prompt actions in response to developments in Eastern Ladakh last year were a testament to its combat readiness and its ongoing capability enhancement programme is aimed at achieving desired results “swiftly and decisively” across domains, Chief of Air Staff Air Chief Marshal V R Chaudhary said today.
In an address on the occasion of the 89th Air Force Day, he also strongly called for upgrading the training modules for air warriors and asked senior officials to invest time and efforts in “nurturing and empowering” their subordinates and young officers and to consider it as their primary task.
Referring to the tri-services integration, Air Chief Marshal Chaudhary also “assured,” the nation of the Indian Air Force’s “unwavering commitment” towards delivering joint capability and generating integrated response options as a part of a coherent national strategy.
Chief of Defence Staff Gen Bipin Rawat, Army chief Gen MM Naravane and several top officials of the three services and the Defence Ministry were among those present at the event.
The IAF also carried out a spectacular air display showcasing its vintage aircraft and modern fleet on the occasion.
On the modernisation plans of the IAF, the chief of Air Staff pitched for “creative and skilful” employment of new-age capabilities through the development of unique tactics and “out-of-the-box” operational plans and training programmes to gain mastery over modern trends of aerial warfare.
“As our challenges continue to rise, so does our strength and resolve to ensure best possible application of air power. When I look at the security scenario that we face today, I am acutely conscious that I have assumed the command at a crucial time,” he said at the Air Force Day parade held at the Hindon airbase on the outskirts of Delhi.
“We must demonstrate to the nation that external forces will not be allowed to violate our territory. I pledge to do all I can to provide you with clear direction, good leadership and the best of resources that I can muster,” he said.
Air Chief Marshal Chaudhary said the year gone by was “quite challenging yet extremely rewarding”.
“The prompt actions in response to developments in eastern Ladakh were a testament to the Indian Air Force’s combat readiness. Our efforts in completing all Covid-related tasks was also a major achievement in support of national efforts,” he said.
Following the escalation in tension in eastern Ladakh in mid-June last year, the IAF deployed almost all its frontline fighter jets like Sukhoi 30 MKI, Jaguar and Mirage 2000 aircraft as well as its attack helicopters in the key air bases in eastern Ladakh and elsewhere along the Line of Actual Control.
In his address, the chief of Air Staff particularly focused on the need to devote attention to human resources.
“It is my firm belief that when we continue to acquire the latest technologies, there is a much greater need to devote our attention to the people placed below us. As seniors, invest your time and efforts in nurturing and empowering your subordinates. I am confident that each one of you will treat this important task as your primary responsibility,” he said.
The IAF chief said that though the “targeted training programmes” are helping air warriors to develop the aptitude for mustering the modern trends of aerial warfare, acquiring the “right attitude” is equally important.
Meanwhile, Air Chief Marshal VR Chaudhary today awarded ‘unit citation’ to three squadrons of the Indian Air Force for their role in boosting India’s military presence in eastern Ladakh last year following the military standoff with China in the region.
The units presented with the ‘Chief of Air Staff’s citation’ are No. 47 Squadron equipped with MiG-29 fighter aircraft, the 116 Helicopter Unit and 2255 Squadron that operates the OSA-AK-M surface-to-air guided weapons, officials said.
The units were awarded during the 89th Air Force Day celebrations at the Hindon airbase on the outskirts of the national capital.
The No. 47 Squadron, formed in 1959, is presently equipped with the upgraded MiG-29 aircraft. After the Balakot airstrikes in February, 2019, the squadron was deployed for the air defence role.
“The squadron flew extensively and maintained a constant vigil to ensure that there were no misadventures by our adversaries…In May 2020, the squadron was deployed for air defence as well as air-to-ground operations in the Northern sector, and carried out extensive operations at high altitude,” said an official.
The 116 Helicopter Unit, formed in August 1967, is equipped with the Advanced Light Helicopter (Mark IV) Rudra.
The 2255 Squadron Det is a frontline OSA-AK-M, surface-to-air guided weapon unit.
The Squadron was mobilised for air defence in Ladakh in response to the Galwan Valley standoff.
“Since then, the squadron has undertaken various innovations to sustain serviceability and reliability of its equipment. This has enabled it to maintain its operational readiness in harsh climatic conditions, even through the harsh winter of Ladakh,” said the official. (PTI)