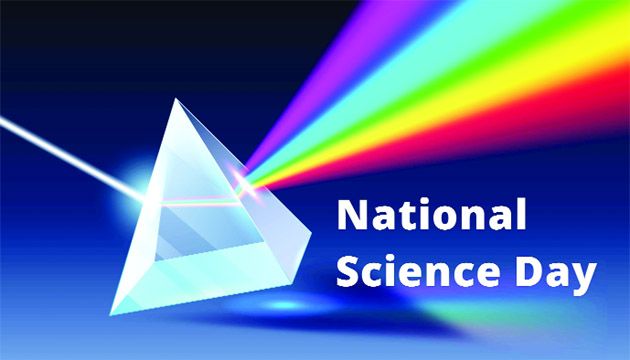 O P Sharma
Jammu and Kashmir has been celebrating the National Science Day like other parts of the country on February 28 every year as this day in 1928 marks the discovery of the “Raman Effect” by renowned Indian Physicist C V Raman for which he was awarded the Nobel Prize during 1930 and bestowed highest civilian award: Bharat Rattan in the year 1954. Now the Science and technology has assumed great significance and the theme for the current year is : Future of STI-Impacts on Education, Skill and Work”.
Steps are already afoot to further promote science and technology in India with notable advances in the missile, space technology, medicine, IT and many other fields with India now emerging as a leading country in the comity of nations. But we still have miles to go and so a greater push has be given for promotion of science and technology. The theme for this year is very relevant and have to make our education suitable for scientific temper and utilise it for bettering the life of the people. The theme, which is a very vital for UTs of Jammu and Kashmir and also Ladakh which have rich bio-diversity and vast scope for scientific explorations for contributing to the overall betterment of life. All-out efforts must be made to popularise and promote science and technology to move forward for wide-spread scientific knowledge.
It may be mentioned that there are fairly large number of research-oriented educational institutions and varsities focusing on agriculture, horticulture, medical science, engineering and IT sectors. In fact, tangible advances have been made on the scientific horizon and notable progress registered putting India on the high rank among the comity of nations. It is notable that our young bright youth are taking to science and in time to come our talented boys and girls will adorn the high ranks of scientific community for bringing benefits of science and technology to the common people.
Bright Career
It may be recalled that Dr. CV Raman was born on November 7, 1888 in the then Madras Presidency (Tamil Nadu) and his father was a Professor of Mathematics and Physics. Young Raman completed his BA and then MA in Physics from the Presidency College, Madras. He got a government job and tried for a career in the science field. He participated in various scientific competitions and the then Government selected him for a scholarship for research work in the laboratories of the Indian Association for Cultivation of Science and the University of Calcutta. It may be added that he researched the spectrum nature of steel, fundamental issues of steel dynamics; the structure and properties of diamonds.
On the recommendation of the National Council for Science and Technology Communication (NCSTC) in 1986 the “National Science Day” began to be observed in India on February 28, the day when the great Indian Scientist Dr Raman made his important scientific discovery. Now National Science Day is celebrated across the country to focus attention on the advancement of science and technology which certainly hold a key to all development.
High Hopes
Every year a specific theme is discussed and debated to sensitize the people about the urgent need for promotion of science and technology to catch up with the advanced nations. To create awareness among the common masses, the event is now organized with seminars, conferences, public debates and discussions in schools, colleges, universities and other academic, scientific, technical, medical and research institutions all over the country. On the very first National Science Day in 1987, the National Science Popularization awards were constituted for recognizing outstanding efforts in science communication and popularization.
Young bright Indian scientists are now rated high at the international level who have done India proud in the all sectors including IT sector, medicine, engineering, space technology and other fields. Some of vital topics like :”Expanding Horizons of Science”; “Clean Energy Options and Nuclear Safety”, “Science for the People and the People for the Science” “Women in Science and Technology” while this year’s theme: “Future of STI- Impact on Education, Skill and Work” has very wide implications. On this day eminent scientists and institutions are given prestigious awards.
Nation’s Objective
Dr APJ Abdul Kalam, a top scientist who had served as the 11th President of India in his book “India 2020” had strongly advocated for an Action Plan to develop India into a knowledge superpower and developed nation. He had worked on high positions in DRDO, ISRO and was popularly known as the Missile Man of India for his work on the development of ballistic missile and launch vehicle technology as also India’s Pokhran-II nuclear tests in 1998. India is on the right tract of science and technology highway and it must now go with quick and sure steps. Key to Advancement
The Prime Minister Narendra Modi has been underscoring the role of scientific knowledge, technology and innovations through bold initiatives for overall speed development so that India emerges as a safe and super strong nation.
Some positive signals are emerging with leading advanced educational and other institutions already in place coupled with lot of promise, scope and talent . India has made tangible strides it has still to move forward for transformation of society to attain the status of super power with a mission of working for peace, progress and spiritual enlightenment for humanity.
(starline. syndicate service@ gmail.com)