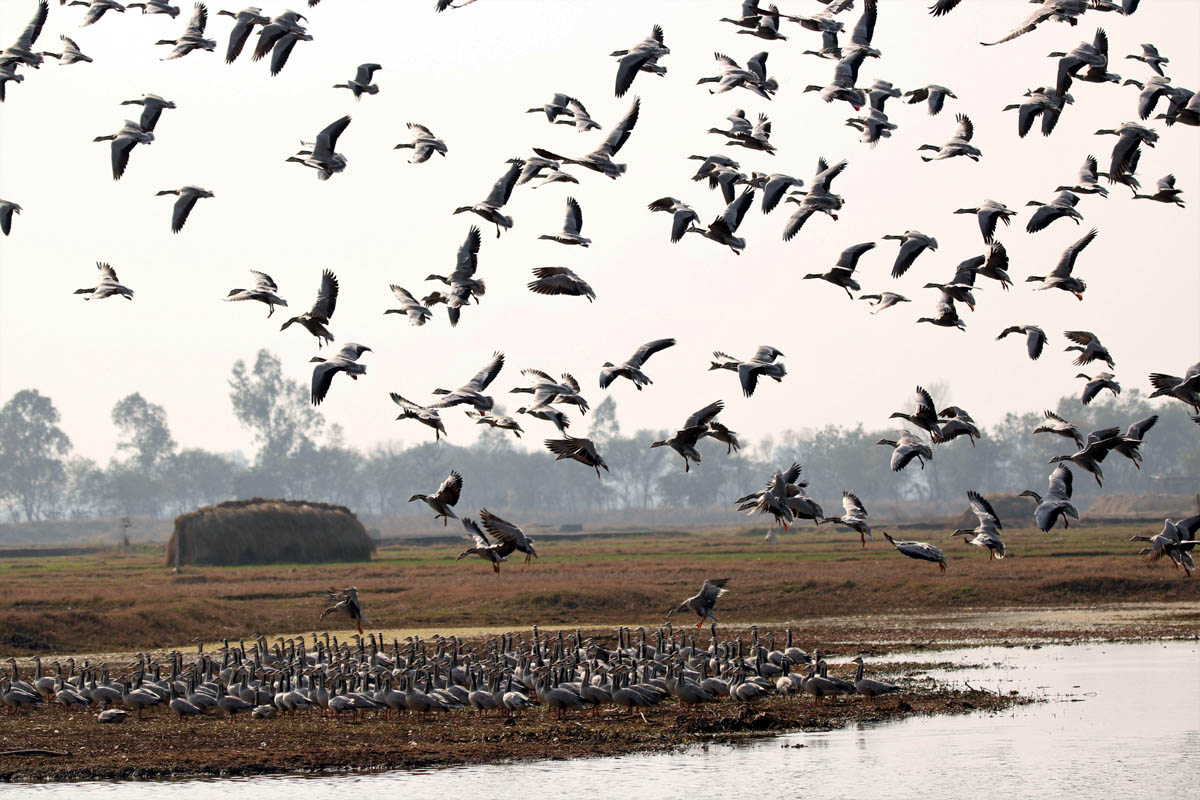 Mohinder Verma
JAMMU, Oct 3: In a major development, the Government has set into motion a process for compulsory acquisition of 353 kanals of private land in order to restore pristine glory of Gharana Wetland Reserve situated near the International Border in R S Pura tehsil, which otherwise is shrinking continuously due to varied reasons including encroachments by the villagers.
Official sources told EXCELSIOR that in a Public Interest Litigation (PIL) titled Rattan Singh Versus State of Jammu and Kashmir and Others, Division Bench of the State High Court had issued directions for acquisition of 353 kanals of private land through negotiations with the occupants.
It is pertinent to mention here that a total of 408 kanals of land is required to be acquired to restore the original area of Gharana Wetland Reserve, which attracts thousands of birds of different specifies from different countries particularly Siberia every year. Of this, 353 kanals is private land and rest is Government land.
On the directions of the High Court, the Revenue Department authorities held several rounds of negotiations with the occupants of 353 kanals of land in the vicinity of Gharana Wetland Reserve but efforts failed to yield the desirable results.
Initially, Revenue Department authorities offered Rs 2.5 lakh per kanal to the occupants of the private land as per the circle rate fixed by the Government but this was not acceptable to the villagers. Thereafter, as per the decision taken in a meeting with the Advisor concerned, an amount of Rs 4 lakh per kanal was offered to the villagers but the latter remained adamant on their demand of Rs 10 lakh to Rs 15 lakh per kanal, which has been found highly unjustified by the Revenue Department.
“As the private negotiations have failed to yield the positive results, a decision has been taken to go in for compulsory acquisition of land for which a detailed note has been drafted by the Sub-Divisional Magistrate (SDM) RS Pura and submitted to the Revenue Department for issuance of formal orders as per the provisions of Land Acquisition Act”, sources said.
They disclosed that through a detailed affidavit authorities have already conveyed to the Division Bench of the State High Court that occupants of 353 kanals of land were reluctant to accept the offers made by the Government as such compulsory acquisition was the only option to acquire the land to restore the original area of Gharana Wetland Reserve.
When contacted, Sub-Divisional Magistrate RS Pura Jagdish Singh confirmed that Revenue Department has been approached for accord of sanction for compulsory acquisition of land as per Sections 6 and 7 of the Land Acquisition Act. “All other efforts have failed to yield any result as such this is the only way out”, he added.
He disclosed that Wildlife Department has already transferred an amount of Rs 11.70 crore for acquisition of land and the same will be utilized for making payments to the occupants of 353 kanals of land.
Section 6 of the Land Acquisition Act read: “When the Government is satisfied after considering the report made under Section 5-A, Sub-Section 2 that any particular land is needed for public purpose, a declaration shall be made to that effect under the signature of the officer duly authorized in this regard”.
“No such declaration shall be made unless the compensation to be awarded for such property is to be paid wholly or partly out of the public revenues or some fund controlled or managed by a local authority and after making such declaration the Government may acquire the land”, Section 6 further read.
Sources disclosed that Wildlife Department has already prepared a detailed management plan for conservation of Gharana Wetland Reserve after acquisition of land. “The management plan will be implemented over a period of five years and foremost priority will be given to fencing of the boundary and establishment of Sewage Treatment Plant”, they added.
It is pertinent to mention here that Gharana Wetland Conservation Reserve was notified in 1981 and is home to more than 150 species of birds. During the winter, the wetland is visited by thousands of birds from Central Asia and some of the migratory bird species visiting this wetland are endangered.
Former Chief Justice of J&K High Court Justice Badar Durrez Ahmed, while hearing the PIL, had dubbed Gharana Wetland as a jewel on Jammu’s crown and said that none can afford to lose it by shutting eyes towards its continuous shrinkage. He had made it clear that High Court will play its role in ensuring restoration of pristine glory of the water body.