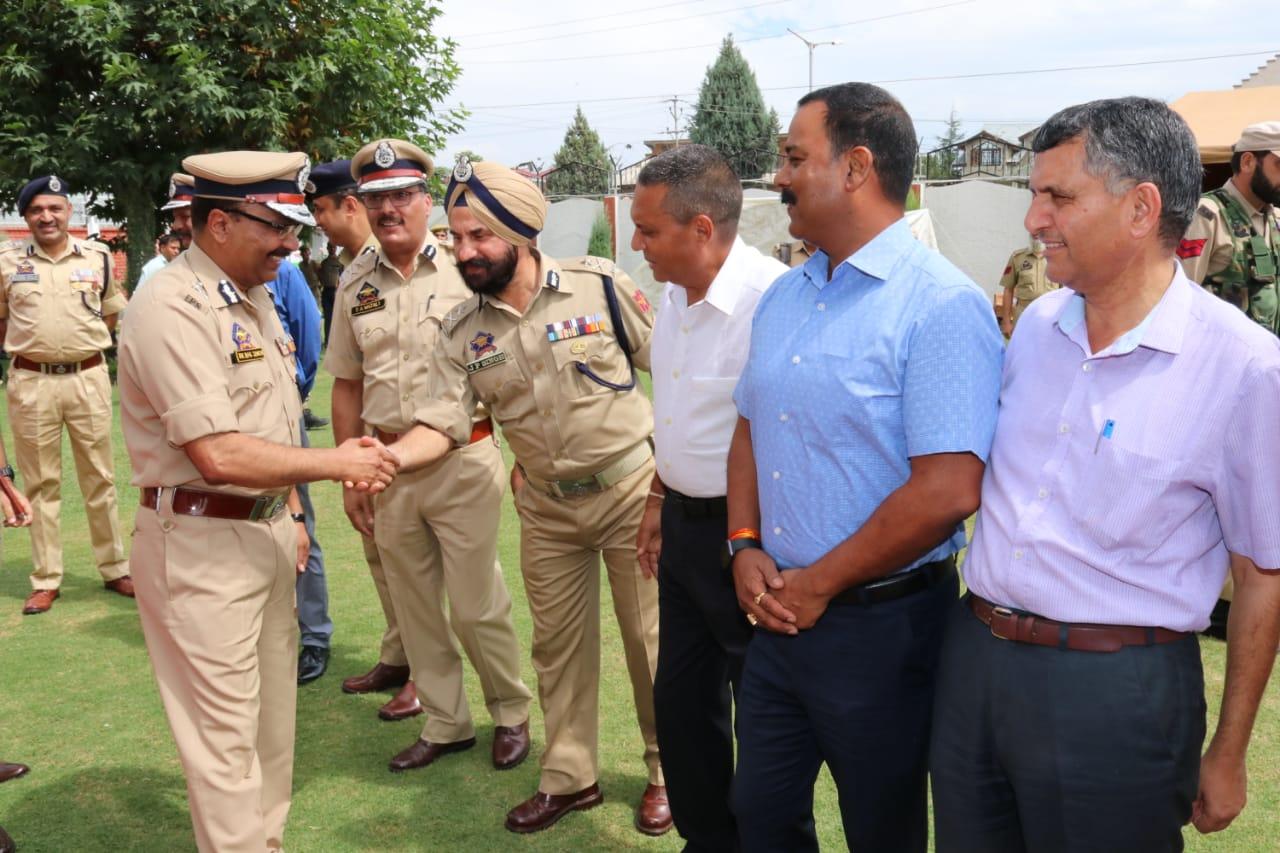 Excelsior Correspondent
SRINAGAR, Sept 7: New police chief Dilbag Singh today said his priority was to stamp out terrorism from the State at the earliest while protecting interests of common people.
Talking immediately after taking over as the new police chief, 55-year-old Singh, who has served the State police in various capacities, said he would also work for the welfare of the police personnel, who have been at the forefront of anti-militancy operations.
Singh, who was posted as the Director General (Prisons) in March this year, was made an interim police chief Thursday night after his predecessor S P Vaid was shunted to Transport department as its Commissioner. Vaid had joined as State police chief on January 1 last year and was due for retirement in October 2019.

Click here to watch video
Singh said the task is daunting but he is sure the Jammu and Kashmir Police will pass all tests in flying colours.
“My priority as of now is to deal with terrorism firmly while protecting the interests of innocent common people. I have held a meeting with my senior officers at the Police Headquarters after taking over and will be interacting with District Superintendents, range DIGs and Zonal IGs in the evening today to have a brief on the ground situation and our priorities,” he said.
Calling the responsibility a great honour, he said due attention would be paid to the welfare of the all police ranks especially the jawans. The State Government is seriously concerned about that, he said.
“The J&K Police has earned a name for itself and it is duty for all of us to take it to greater heights,” he added.
Singh, who has been made the in-charge Director General of Police, is a 1987-batch officer. He was made the head of the Prisons Department in March after the infamous of escape of Lashkar-e-Toiba (LeT) terrorist Naved Jhatt while the latter was on a routine health check-up at a city hospital in February.
Singh, during his tenure as Director General of Prisons, streamlined many things, including the removal of hardened terrorists from Kashmir jails.
He will have a regular appointment only after his name is cleared by the UPSC.
Meanwhile, after taking over as the Director General of Police, Dilbag Singh chaired a high level meeting of police officers. He impressed upon the officers to continue with their work for restoration of peace in the State. He said that the J&K Police has seen many challenges in the past and will sail through the present challenges as well.
He directed the officers to look after the welfare and other needs of their subordinates particularly the constabulary. He assured them that as the leader of the organisation he will always be behind his jawans and officers. He further said that J&K Police has earned a name for itself and it’s duty of all of us to take it to greater heights.
Dilbag Singh, a 1987 batch IPS officer, who has served the State in various capacities in filed and at staff levels, is a very decorated officer. He has served as ASP headquarter Kupwara, Addl. SP Doda, SP Traffic NHW, SP Doda, SP Vigilance, SP Baramulla, Commandant JKAP 7th battalion, ADIG Anantnag, ADIG Baramulla, DIG Security J&K, DIG Jammu, Director SSG J&K IGP Crime & Railways, IGP CID, IGP Traffic, IGP Homeguard/ Civil Defence, IGP Armed, Director SK Police Academy Udhampur, IGP Jammu Zone, MD Police Housing Corporation, ADGP Security, Commandant General Home Guard/ CD and DG Prisons with addl. charge of Fire and Emergency Services.
In New Delhi, the Jammu and Kashmir Government approached the Supreme Court today to explain the reason behind appointing an interim Director General of Police in the State without consulting the Union Public Service Commission as mandated by the Apex Court in July this year, officials said.
Standing counsel for the State Shoeb Alam mentioned about the application before Chief Justice of India Dipak Misra, they said.
The matter is likely to be taken up on Monday.
In its application, the State informed the Apex Court that Jammu and Kashmir Police, which has been fighting militancy for the last three decades, cannot be left headless for a minute and therefore, the decision was taken by the administration on Thursday night, they said.
In July, the top court had taken note of an application filed by the Centre in which it claimed that certain States have been appointing acting police chiefs and then making them permanent just before the date of their superannuation to enable them get the benefit of an additional two-year tenure till the age of 62 years.
A bench of Chief Justice Dipak Misra and Justices A M Khanwilkar and D Y Chandrachud passed slew of directions for appointment of State police chiefs.
“None of the states shall ever conceive of the idea of appointing any person on the post of Director General of Police on acting basis, for there is no concept of acting Director General of Police…,” the bench had said.
Chronicling the steps to being taken for appointment of the police chiefs, the Apex Court had said, “All the States shall send their proposals in anticipation of the vacancies to the Union Public Service Commission (UPSC) well in time, at least three months prior to the date of retirement of the incumbent on the post of Director General of Police”.
It said the UPSC shall then prepare a panel as per the earlier directions of the court and intimate it to the States, which in turn shall immediately appoint one of the persons from that list.
“An endeavour has to be made by all concerned to see that the person who was selected and appointed as the DGP continues despite his date of superannuation,” the bench said and added that the extended term beyond the date of superannuation should be a reasonable period.