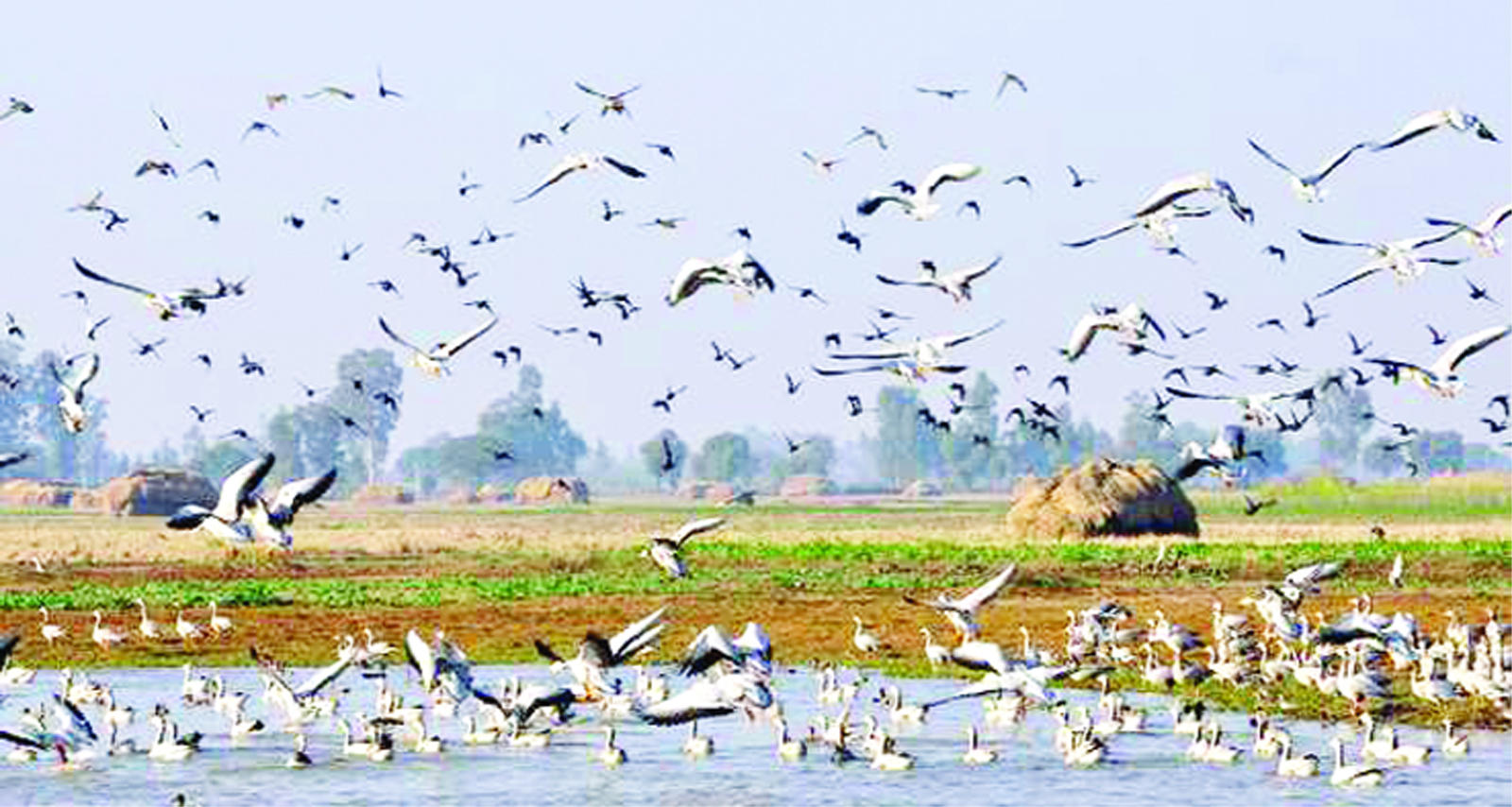 Varun Khajuria
In the vast, varied bio-diversity around the world, the lakes and the wetlands are under great threat. This is more so due to human and biotic interference emanating from ever-increasing population, industrialization, overuse or misuse of land for agriculture and exploitation of resources beyond all limits. Alongside, the natural phenomenon like sizzling summer with soaring temperature year after year, the abrupt climatic changes off- shooting thereby disasters and calamities such as floods and many more of its ilk have sent alarming signal to the countries all around the world. In such a situation, the Survival of man is in peril over the planet earth and as preserving bio-diversity has now become a catch phrase for the ecologists around the world.
In Jammu and Kashmir lakes and wetlands are drying due to ruthless encroachments and enormous siltation though the Govt. is endeavouring hard for rapid actions under the close surveillance of Forest Deptt. (Wildlife wing and the Department of Environment and Remote Sensing). The public awareness and sensitization is the paramount need of the hour as the forest laws are brought under legislation and enactment but these are being honoured in only its breach. This has further endangered thousands of the spectacular wildlife and birds (Avi – fauna) so much so that the winged visitors have become more sensitive and resultantly abandoned the lakes and wetlands and alienated migration which over the centuries has been an ongoing process. Glaringly enough, the Siberian cranes have now abandoned visiting world re-knowned Bharatpur in Rajasthan and so is the case with chilka lake where the situation is grave. This has adversely affected the socio- economic status of the people, apart from depriving the serene and scenic beauty of these water – bodies. And in Delhi zoo itself the migratory birds cover long distance for seasonal changes, food and finding new ground for breeding.
The migration of birds in India is around of 1200 species which is spectacular and inspring. As per estimates, in India itself 4.5 million hectares come under wetlands out of which around one and half million, are natural and some two and half million are man made. Cota Donana (Spain) is world re-knowned house ground for half of the avian species in Europe itself, The situation is likewise same around the world insofar as shrinkage of water- bodies is concerned. Talking of our most famous lake ( Dal in Valley) the area has now shrunk to 10 kms. It was around 25sq. kms half a century back .Where has all the depleted area gone? Obviously, it has been either silted or devoured under encroachment. Admittedly, this has broken the natural fabric of environment. Same is the case with Wular lake ( Asia’s largest) which has lost its pristine grandeur and glory.As such, it gives a pointer to the modern man to be eco-friendly and eco-conscious which defacto he is not so.
Over the years, the wild life deptt.in association with the over all guidance of Forest Deptt. has endeavored to declare as many areas under wildlife sanctuaries, game reserves parks and further made endless efforts in the preservation of the lakes and other water bodies but again point arises about public awakening which I repeat is the paramount need of the hour. The present status as of now is that we are having as many as seven National parks and wild life sanctures (Dachigam NP, Hemis High altitude NP, Overa WLS, Kishtwar NP, RamnagarRakh WLS, Nandni Game WLS, and Surinsar Mansar WLS) and in so for as wetlands are concerned, there are as many as one is Ladakh region, six in Srinagar and five in Jammu regions. These are; Noorie Chan WL (Ladakh), Hokar, WL, Shallabug WL, Mirgund WL, ChetlupPampur WL, Krunchoo WL and Hygam WL in Srinagar and Garang WL, Parwal WL, Nanga WL, Kukarum WL and Sangral wetland reserves in Jammu, The overall status is that there is a sum total of 44 (forty four Game areas under National Parks sanctuaries and wetland reserves and all these warrant protection by all and one in co-operation with the Deptt, and the close supervising agencies.
It is most unfortunate that Sanasar now stands almost shrunk and its restoration is of utmost importance where visitors throng the lake during summer as well as in winter. The spot is located amidst lush green chir pines and is famous for its scenic and serene beauty which is touching new height for its importance with every passing day.
Some suggestive measure in preserving and protection of the wetland and other water bodies, apart from Sanctuaries/ National Parks.
Public awareness
The Jammu and Kashmir Wildlife ( Protection) Act 1978 was recently amended in 2002 and the amended rules, regulations, enactment made there under need to be made public by way of conducting debates, seminars symposium to honor the spirit in legal sanctity.
Environment Protection
This can be done with an equal ease by way of massive afforestation/reafforestation operation by planting the most suited species to site, preferably those which are soil binding and water conserving to dilute siltation of the wetland and avert erosion accruing thereupon.
Aversion of biotic areas
Here, everyone of us need to be psychologically attuned and mentally prepared to make the wetland neat and clean.
Non-Diversion of the areas
It should be the most sinful to denotify the areas under sanctuaries, National Parks, wetland for any purpose under pressure as these areas are as important as our national, heritage.
Will Power
Though the thinkings/attitude differ from person to person, but, there is always something common and that common we have to built in all our senses to safeguard the environs that enlivens us.
(The author is Former Dy Conservator J&K Forest)