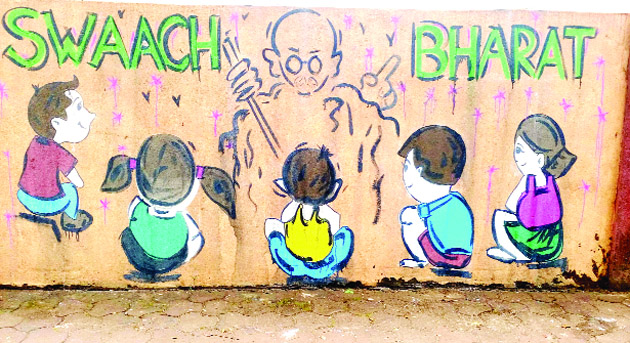 Ravia Gupta
According to the Bureau of Outreach and Communication under the Ministry of Information and Broadcasting (2019), the central government spent Rs 670 Crore on outdoor publicity in the last five years. Publicity media include Press, Cinema, Radio, Television, Exhibitions and Demonstrations, Mass mails and outdoor media. Outdoor media is one of the oldest forms of publicity media which includes neon signs, bus panels, hoardings and posters. The word outdoor implies that they are out of doors mostly in open spaces. Posters are the oldest outdoor media existing since Roman times. Literature suggests that outdoor publicity creates a visual sensation among people who come in contact with the publicity material and evokes involuntary attention of the passer-by for a few seconds. Emphasis is more on the visual appeal to attract eye-balls (Peszko, 2016).
According to the World Bank India’s total health expenditure, including both government spend and from people’s pocket was mere 3.53 % of the GDP in 2017. As per the World Bank’s classification of countries by income levels, India continues to be a lower-middle income ($1,036- $4,045) country for the fiscal year 2020. India’s healthcare system reported being among the worst in the world. As per the annual report of Central Bureau of Health Intelligence, India’s public health expenditure as a percentage of GDP is even lower than that of our neighbouring countries, such as Sri Lanka, Bhutan and Nepal. This also reflects on lack of initiatives being takenboth by the government and private players to create health awareness among people more specifically lower middle class which gets affected the most. Resorting to public health awareness campaigns is essential. Posters, even though a traditional medium of communication, can be a useful tool in raising health consciousness and spreading health awareness among people.
To address the exposure, perception and retention of health posters by people from the lower middle classin the age groups of 25 to 55 in Jammu city,a small study was conducted with an aim to study the effectiveness of posters as a medium of primary health communication among common people who may not have access to multiple sources of information.The study yielded over 100 responses from people belonging to the lower middle class.Culturally, in Jammu predominantly male respondents came forward to respond (72.8%). Majority of respondents (37.9 percent) were in the age group of 25-34. It was found that 26.2 percent somewhat noticed posters on display and around 40.8 percent somewhat read the posters. Around similar percent 40.8 percent understood the message conveyed through the posters a lot. However, 44.7 percent found the posters somewhat well-designed and attractive and 34 percent found themselves somewhat motivated to take action or learn more about their health after seeing the posters.
The results of this study could help policymakers better understand the perception regarding posters among people from the lower middle class and consider the use of posters as an effective means of raising health consciousness and spreading health awareness among people. Studies in the past have proven that posters are an affordable and accessible form of communication. The creative manner in which posters convey messages allow consistent recall and action. Use of posters could be vital for a society that is overloaded with several health issues.
Communication scholars across the world have emphasized on selective perception as a tendency of people to interpret messages as per their existing attitudes. People have distinct psychological characters and this distinction further creates differences in the manner the same media content or information is selectively perceived and interpreted. Other factors also contribute to this psychological difference such as age, values, family, opinions etc. Selective perception is also influenced by social relationships.
The concept of selective exposure dates back to the 1940 US presidential campaign. Lazarsfeld, Berelson, and Gaudet (1948) observed that supporters responded more often to agreeable messages and this observation later came to be known as selective exposure by Festinger (1957) in cognitive dissonance theory. Festinger (1957) theorized that cognitive dissonance could be reduced by selecting like-minded information (Stroud, 2017).
A study conducted by Gignon (2012), Ward (1994) and Kerr (2000) ascertained that posters displayed in hospitals, waiting rooms and emergency departments of hospitals are an effective tool for health education on various topics including family planning, AIDS prevention, anti smoking etc. Due to boredom patients or attendants were forced to read posters in a hospital waiting room and thus the time spent reading posters determined the level of content awareness.
Posters can promote health awareness. A higher number of participants indicating that they have noticed posters show the awareness level of posters among them and very importantly it suggests that the content of posters has a far reach (Ward & Hawthorne).
CONCLUSION
The main objective of posters is to influence attitudes, market a product and change behaviour. Public health posters fall into the category of changing public behaviour and thus improve health practices (Nunyenge, 2013). Studies have suggested that posters are an effective medium of communication and work best when approached through the principle of simplicity in content, colour, characters, design and format. When placed strategically, posters generate curiosity among individuals to be a part of planned programme and policies Gobind and Ukpere (2014) and posters could be used by non-profit organizations to create social awareness (Nishtar, et al., 2014). However, there is a need to explore creative forms of spreading health awareness among lower-income which constitutes the majority population.
(This is an extract from the study conducted by the author “Effectiveness of Posters as a Medium of Communication: A Study Among the Lower-Middle Class” published in Communicator Journal, special Issue on Health Communication Volume LV (1 and 2), January-June 2020 )
feedbackexcelsior@gmail.com