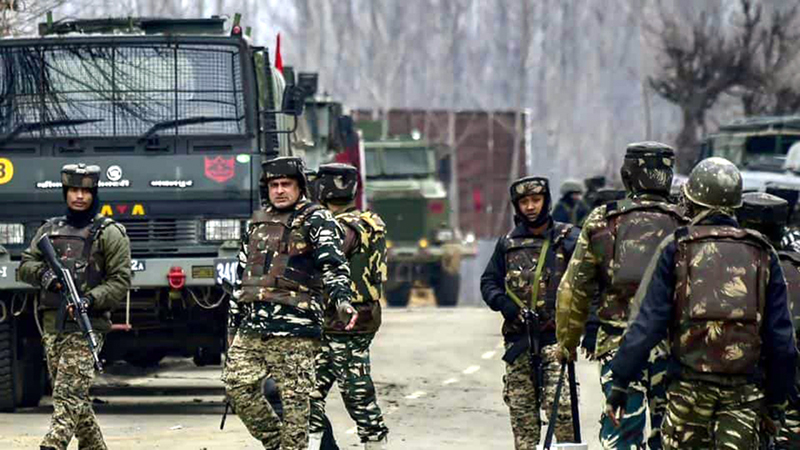 JAMMU, Feb 21: In the wake of deadly terror attack at Pulwama in South Kashmir in which 44 CRPF personnel were martyred and questions raised from some quarters over troopers’ movement to the Valley by road, the Union Ministry of Home Affairs (MHA) today approved entitlement of air travel on four routes involving Jammu and Kashmir for all jawans of Central Armed Police Forces (CAPFs).
The air routes approved in an order issued today by the MHA included Delhi-Srinagar, Srinagar-Delhi, Jammu-Srinagar and Srinagar-Jammu. This will immediately benefit approximately 7.8 lakh jawans of para-military in the ranks of Constable, Head Constable and ASIs, who were otherwise not eligible for the air travel earlier.
The MHA announced the significant decision through a series of tweets followed by detailed handout issued by the MHA, headed by Rajnath Singh.
The decision comes just a week after suicide car bomber rammed into a CRPF convoy at Pulwama in South Kashmir on Jammu-Srinagar National Highway targeting a para-military bus in which 44 CRPF jawans were martyred. Some political parties and other organizations had raised concern over the attack saying the troopers should have been airlifted to the Valley to avert the tragedy.
The official MHA statement said: “Personnel of the paramilitary forces deployed in the Kashmir valley for counter-terror operations have been entitled by the Government to take commercial flights to either join duty or go on leave in Jammu and Kashmir”.
The statement said the MHA has approved the entitlement of air travel on Delhi-Srinagar, Srinagar-Delhi, Jammu-Srinagar and Srinagar-Jammu sectors to all the personnel of the Central Armed Police Forces (CAPFs)”. This includes the journey of para-military personnel for joining duty, transfer, tour or going on leave. Till now, officers in the rank of Inspectors and above were given this air travel facility.
“This facility is in addition to the existing air courier services for all para-military personnel that have been steadily extended in all sectors by the MHA to help the jawans cut down on travel time during their journey to and from home on leave. In Jammu and Kashmir sector, it may be recalled that air courier service for the CAPF jawans was approved for Jammu-Srinagar-Jammu sector,” the MHA statement said.
Subsequently, it added, the Service was extended to cover Delhi-Jammu, Jammu-Srinagar, Srinagar-Jammu and Jammu-Delhi sector in December 2017 and number of flights was further extended in December 2018. In addition, the MHA statement said, air support is also provided from Indian Air Force (IAF) as and when required (for airlifting of the troopers). According to sources, as many as 65,000 CRPF personnel are deployed in the State as part of 65 battalions apart from units of the Border Security Force, Indo-Tibetan Border Police, Central Industrial Security Force, Sashastra Seema Bal and the National Security Guard present in the Kashmir valley for rendering a variety of roles in the internal security grid. Sources said the Central Government’s decision to facilitate travel of para-military jawans by air to Kashmir from New Delhi and Jammu and vice versa will minimize the threat of terror attacks on the convoys on the National Highway. Sources said jawans and sub-officers, the ranks who were killed in the suicide attack in Pulwama, will now be able to book tickets in regular commercial flights and claim reimbursement from their organization or force for this travel to and from Kashmir.
“Today’s Government decision will allow more and more personnel to undertake air travel to and from Kashmir but the requirement of running convoys of the security forces cannot be brought to zero,” they said.
According to sources, the Central Government decision would go to a large extent to minimize the threat of terror attacks on convoys of security forces on vulnerable Jammu-Srinagar National Highway, where number of IED and other attacks have been carried out by the terrorists.
However, they admitted that movement of convoys can’t be completely stopped on the Highways as para-military forces had to move from one formation to another besides carrying out search and cordon operations. But due precautions would be taken during movement of convoys on the National Highways, they said.