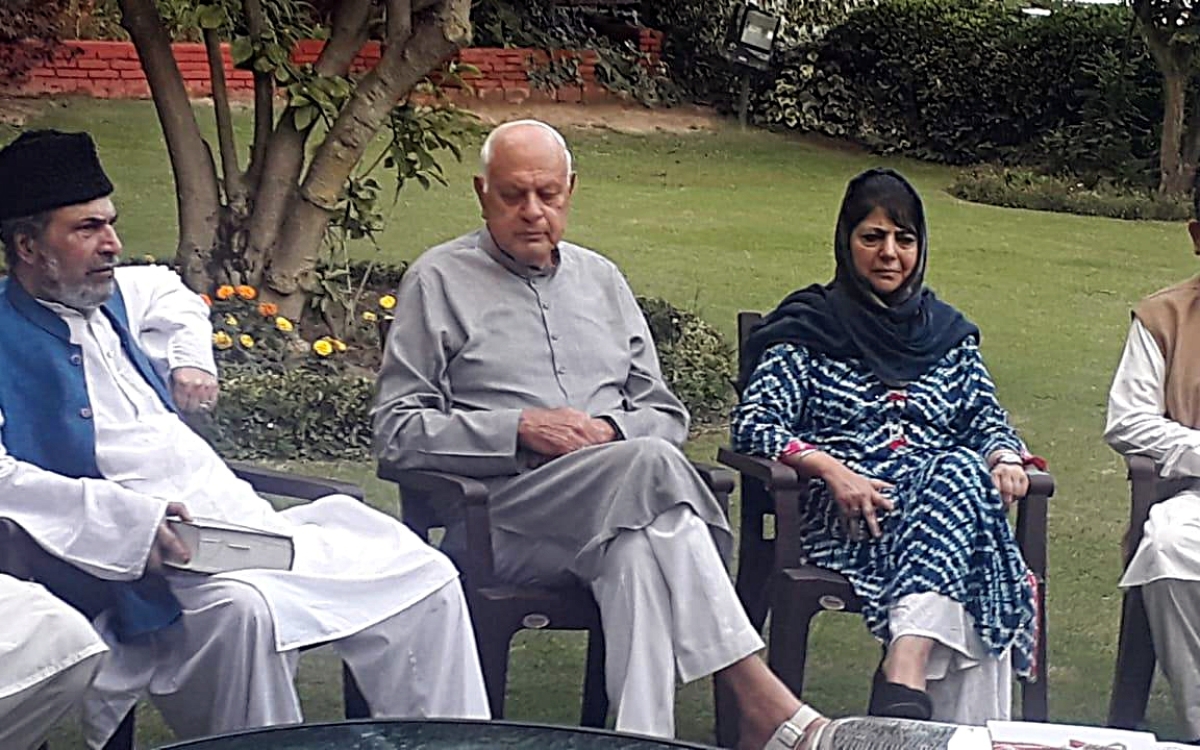 Top Union Home Ministry (HM) officials today conveyed to a Parliamentary Panel that the situation in Jammu and Kashmir is getting normal and detained political leaders, including former Chief Ministers, will be released but gave no time-frame for it.
Official sources said that Union Home Secretary Ajay Kumar Bhalla and Additional Secretary in the Home Ministry Gyanesh Kumar and other Ministry officials briefed the Parliamentary Standing Committee (PAC) on Home Affairs, chaired by senior Congress leader Anand Sharma, on the situation in the Union Territories of Jammu and Kashmir and Ladakh.
Members of the Lok Sabha and Rajya Sabha quizzed top Government officials on the detention of political leaders, particularly three-time former Chief Minister and Srinagar MP Farooq Abdullah, who was charged under the controversial Public Safety Act on September 17.
The MPs were also agitated about the prolonged detention of Abdullah’s son, Omar Abdullah as well as PDP president Mehbooba Mufti, both former Chief Ministers, who have been under detention since August 5, when the Centre withdrew Jammu and Kashmir’s special status under Article 370 and bifurcated it into two Union Territories, sources said.
Referring to the release of the detained political leaders, Home Ministry officials conveyed that some had been released and others will be freed gradually but refrained from giving any time line, sources added.
Home Ministry officials told the Parliamentary panel that those detained under the PSA can challenge their detention in a Designated Tribunal. If not satisfied with the order of the Tribunal, they can move the High Court. Abdullah is the only political leader detained under the PSA in Kashmir.
The Home Secretary, sources said, further told the MPs that the situation in the UT of Jammu and Kashmir is getting normal, schools are open and the apple trade is going on.
The MPs also raised the issue of curbs on the internet in the Valley since August 5. Home Ministry officials, it is learnt, said the restrictions were imposed as the internet could be used by terrorists for subversive activities as well as by anti-social elements to spread rumours.
The Parliamentarians were told that there were 71,254 incidents of terror related violence in Jammu and Kashmir since 1990 in which 14,049 civilians, 5,293 security personnel and 22,552 terrorists were killed.
Home Ministry officials also told the members that all Central laws have become applicable to the new UTs, State laws overlapping with Central laws stand repealed and remaining State laws brought in line with the Constitution of India.
The new political map of India depicting the two new UTs-Jammu and Kashmir, and Ladakh, which includes Pakistan occupied Kashmir and it’s so called capital Muzaffarabad and Gilgit-Baltistan-was shown to the MPs during a presentation.
The new UT of Jammu and Kashmir has 22 districts with a population of approximately 122 lakh and there are two districts in UT of Ladakh-Kargil and Leh, Home Ministry officials said in their presentation.
They also said all landline services, post paid mobile voice phone services have been restored in both UTs and restrictions under Section 144 on movement withdrawn or relaxed, except for night time restrictions in the Valley.
According to sources present at the meeting, differences between the BJP and the Congress MPs cropped up over the issue of Jammu and Kashmir being discussed in the panel. While BJP members cited the rule book to say the panel should not interfere in the work of the executive, Congress MPs said the issue was important and had to be discussed, the sources added.
Meanwhile, Union Home Secretary also conveyed to the MPs that the Centre has constituted a three-member committee for division of assets and liabilities of Jammu and Kashmir between two successor Union Territories, which came into existence on October 31.
An advisory committee has been constituted under Section 84 of the J-K Reorganisation Act for apportionments of assets, rights and liabilities between UT of J-K and Ladakh, Bhalla and his team of officers told the panel.
They said the 14th Finance Commission award has been apportioned between the UTs of J-K and Ladakh in the ratio of 70 per cent and 30 per cent for the remaining five months of the 2019-20 fiscal. All the 7th Central Pay Commission-mandated allowances have been approved for Government employees of the UTs of J-K and Ladakh.
Earlier, the Home Ministry had announced that former Defence Secretary Sanjay Mitra would be the Chairman of the committee, retired IAS officer Arun Goyal and retired Indian Civil Accounts Service (ICAS) officer Giriraj Prasad Gupta would be its members.
As per Section 84 of the Act, the assets and liabilities of the existing state of Jammu and Kashmir have to be apportioned between the Union Territories of Jammu and Kashmir, and Ladakh.
On August 5, the Centre announced the abrogation of the special status given to Jammu and Kashmir under Article 370 and division of the state into the two UTs.
The apportionment of the assets and liabilities of the existing state of Jammu and Kashmir shall be subject to the recommendations of a committee constituted by the Central Government, it said.
According to Section 85 of the Act, the Central Government, by an order, can establish one or more Advisory Committees for apportionment of assets, rights and liabilities of the companies and corporations constituted for the existing state of Jammu and Kashmir between the two Union territories. (PTI)