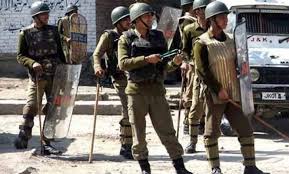 Excelsior Correspondent
Srinagar, Jan 16: Police today rescued a youth and prevented him from joining militancy to take revenge from the Revenue authorities for long pending dispute.
Police said one Mohammad Ashraf Sofi son of Ghulam Mohammad Sofi of Nunner, Ganderbal went missing yesterday from Ganderbal and a missing report was lodged at Police Station Ganderbal.
Police said that the enquiry into the mysterious missing of Sofi revealed that his father had purchased land from a migrant family about 10 years ago but no possession was given to them till date. “His family fought case in Revenue courts and also got latest directions for getting possession from FC Revenue”, said police.
“Meanwhile, his father four days ago died of heart attack, who was a cancer patient. Due to prolonged delay in settlement of land dispute and increased sufferings of his family, the boy left home to join militancy so as take revenge from revenue authorities especially Tehsildar Ganderbal causing unnecessary delay in disposal of revenue matter”, police said.
Police said that they rushed parties along with the family members of missing person to different locations. “His latest location was traced near SICOP complex at Bijbehara and accordingly police party rushed there and convinced him to return home as the land dispute will be got settled through Revenue authorities at an earliest”, police said.
Sofi was brought back to Ganderbal and handed over to his family. Police requested the ADC, Ganderbal to look into the revenue matter of the family.