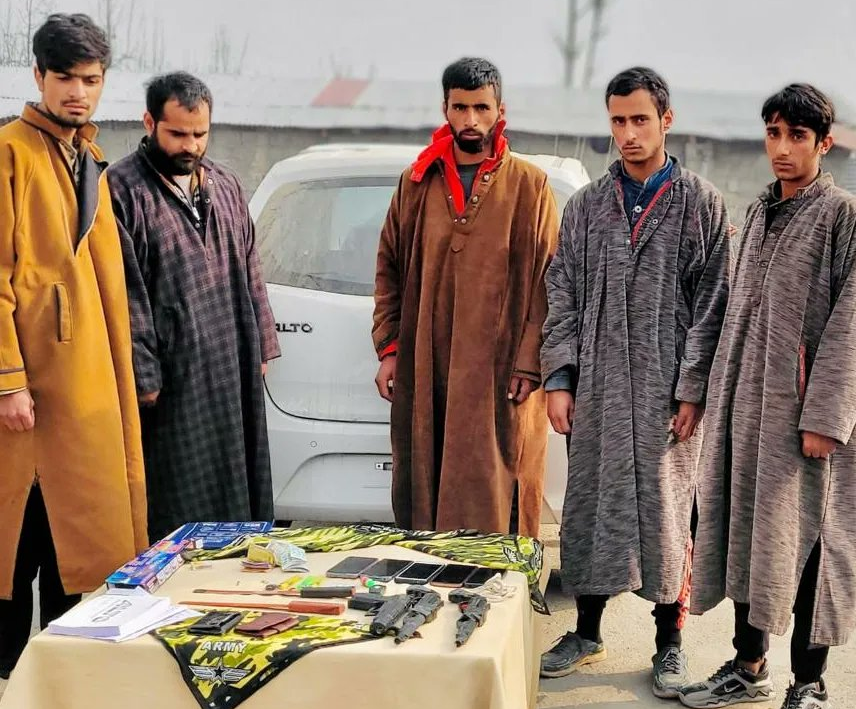 Srinagar, Dec 02: Police on Friday claimed to have busted an extortion racket by arresting five robbers, who according to police were impersonating as terrorists in south Kashmir’s Kulgam district.
Quoting a police statement, that the Kulgam Police received multiple complaints from the residents of Katrasoo, Matibugh and Tarigam etc, that some persons entered their houses proclaiming as militants ,threatened them with weapons and asked for money and other valuable items & fled away from the spot.
The police spokesman further stated that taking Cognizance of the matter, a case with FIR No 92/2022 under relevant sections of law was registered at Police Station Yaripora.
During the course of investigation, a special team led by SHO Yaripora was constituted.
Searches were conducted and multiple checkpoints were established to arrest the accused.
” Today, after generating a specific information regarding the module , a special naka at Yariporawas was established and five persons were arrested,” the spokesperson said.
The five accused were identified as Nazir Mushtaq Malik, a resident of Pinjoora Shopian, Khalid Hussain Deedad, a resident of Sangarwani Pulwama, Rizwan Ahmad Deedad, a resident of Sangarwani Pulwama, Karman Ahmad Deedad, a resident of Draklarn Abhama, Pulwama and Abrar Ahmad Teadwa, a resident of Sangerwani, Pulwama.
“Fom their possession two toy guns, a toy pistol, two cutters, five mobile phones and 05 masks were recovered, also vehicle used in commission of crime has been seized. Also Further investigation into the matter is in progress,” he said.
General public are requested not to fall in any such trap and to inform concerned Police Station about any such incident immediately, read the statement. (Agencies)