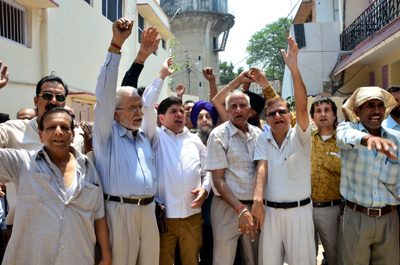 Excelsior Correspondent
JAMMU, May 28: SOS International– an organisation for PoK Displaced Persons today staged a massive protest demonstration over alleged carrying out malpractices at Provincial Rehabilitation Office (PRO), Wazarat Road, near DC office Jammu.
The protest demonstration in which hundreds of PoK Displaced Persons participated was spearheaded by SOS International chairman Rajiv Chuni. They were raising loud slogans against the PRO and other staff of the office, demanding action against them.
While addressing the protesters, Chuni said that several complaints of misconduct and bribery were received during the passage of time. “PoK DPs are being duped by officials of PRO as they ask for bribe for every single task. PoK DPs are asked for bucks against getting Displaced Person certified copy, even the forms that are free of cost are being sold for rupees. PRO has been transformed into hub of malpractices and den of corruption.  It is very shameful on the part of Government that such ineligible persons are inducted in the committee who are openly carrying out the practice of bribery.
A PoK DP who manages to collect the documents that too after paying bucks to officials faces another big hurdle during submitting the file as without paying bribe one can’t submit the file. If a person doesn’t pay for the same, the officers at PRO deliberately put some objections in file, resulting in delay in relief amount. In nutshell from beginning to end, every step goes through warming the pockets of officers that is indeed quite shameful and disgusting”, he alleged.
Speaking further, Chuni said that such malpractices have already been brought into the notice of PRO but nothing has been done on ground and the spree is still going on. “The committee that has been constituted to solve/pass the cases of PoK DPs is indulged in wrongdoing that is totally unacceptable and has put the community in another trouble. It is difficult to understand and nobody knows who has elected these members of committee and their qualification, level, experience, grade, field of specialization and other essential information is not known.
Chuni urged upon the Chief Minister Mehbooba Mufti, Revenue Minister and Divisional Commissioner to look into the matter and take appropriate action against the corrupt officials.