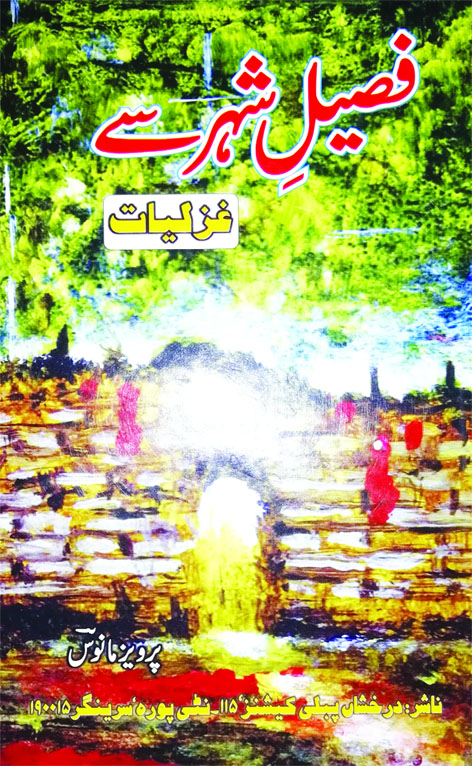 Adarsh Ajit
na main ghurbat se darta hun na laachari se darta hun/faqt is daur ke aadam ki ayaari se darta hun
Manoos is very much concerned about the waning amity, goodwill and affection. He exhausts all his capabilities to explore the ways for betterment. He is worried about how to cross the dark dense of the desert. For him enough water has flown down the bridge. He wails how long his land will remain a hopeless barren. Even in the era of degrading moralities, he tries to save the legacy. Almost all the poems, in his anthology, divulge pain, woes, wailing and weeping, regretting and crying, depression and hopelessness, and obviously, it is all in reference to the turbulent Kashmir though the poet has painted his feelings in a universal mould and hence has veiled the real culprits, real victims and the real name of the area of conflict. His uncontrollable pangs of love give a clarion call to his beloved, in any form and in any relation, to give a kick to the philosophy of peace. He searches for a single light in the night of cruelties:
Udd ke aajaye voh baarood ki is basti mein/ek farishte ki tarah aman ko par de maula
The near and dear give pain in their leisure. On one side, they give the clue of destination but on the other side; they make ways to give blisters to the poet’s feet. The poet sends hidden ocean of tears and pain through the roses. Unfortunately, he gets a featherless pigeon in return. Ironically, he also receives a house made of glasses as a gift but the sender also sends stones to his neighbour:
mujay tofe main ghar sheeshe ka deta hai magar fir voh/padosi ke liye do chaar pathar bej deta hai
Maanoos thinks that Kashmir has become area of wild-hearted humans. He wants someone to chant a mantra to awaken the slumbered humanity.  The poet is going to make a will of his pain in the name of his beloved. The climax is that the rich come to make business out of his wounds. The poet is going to make himself Kashmir:
ameer shahar karne aagaya zakhmun ka sauda/main apnay jism ko Kashmir karne ja raha hun
Maanoos predicts if Kashmir will be blooded, the way it is going, the day is not far when the birds will laugh sitting on the dead bodies. Everything was flooded just in moments. The poet also sneers the young forgetting their parents and not coming home even on their burial/funeral/cremation. The materialistic approaches have made them mechanical cutting the emotional connectivity. The poet is not worried that his home was devastated by the floods. The greater tragedy is that his old letters have flown with the wild waters. . He cautions that enemies, with or without form, are everywhere to derail the humanism. He warns to check the speed, as the foes are ready to attack:
dena bohot dhyaan tum apni uddaan par/baittha hua hai aik shikaari machaan par
Maanoos loves nature. He is fan of rural life. Nevertheless, the competitive life compels him to shift to urban areas. He is repenting now. He recollects the peaceful air of the rustic/village:
sar par sawaar shahar ka kaisa junoon tha/kachche makaan mein kitna sakoon tha
Despite all stresses, pulls and pressures, Parvez, speaks his conscience telling that one should not be faithless towards his country.  He aspires for hearts, full of love, building Tajmahal of faithfulness. Referring to Shah Jahan he also states that one should not forget about the punishments.
The past is indelibly printed on the mind and heart of Maanoos. The images of the desolated mansions kill him within. However, he feels some relief on seeing their existent traces. He symbolizes these with his failed love. The poet lays stress on forgetting the strained relationship and the angry and frenzied moments .The borders dividing the friends and close ones irritate the poet. However, the walls still do not imprison the love and warmth for one another:
hawayi aman jo sarhad ke paar tak ponhche/to meri khair khabr mere yaar tak ponhche