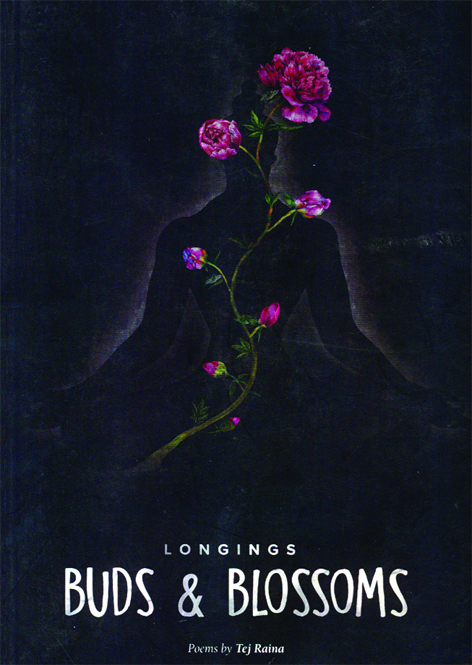 ‘Longings Buds and Blossoms’ by Tej Raina is not an ordinary book of poems. It is the spiritual journey of a poet and this journey starts from unlearning the wisdom of worldliness.
I showered ‘my wisdom’
on folk
I wove for them
the web of words
talks
within me
the gaping darkness
persisted
and devoured me.
From here the existential crisis of the poet also begins and he asks himself
Am I
a blind folded bull
circling an oil press
Awareness as such germinates in him. His thinking and feeling gets consummated by the eternal mate and the urge permeates each, pore of his being. He calls this urge as love urge and he begins to feel rhythm of life sweetened and burdens cast away. A new realization dawns upon him.
I twisted my mind into wicks
All clues lost their way
I abandoned all search
and questions
watched the quiet
and said to my mind
‘Remain aware’
What is awareness? Isn’t it to known ourselves. The desire to know myself becomes the focal point for the poet Tej Raina. But when he looks within he finds
Avarice
caught me in the net
choice rules
I crushed ‘me’
Thisness and thatness
splintered me
Now where is me?
This sets his mind afire with embers of longing, a glow for the eternal mate. The glow of desire becomes so intense that it becomes ‘love flame’ inside.
The ignorance is burnt down completely and the poet begins to hear calls of the unknown. The non essential becomes an aberation. He disengages mind from thoughts and body and shuns all that differentiates and divides. He becomes aware of being. But the path is not yet easy. Maya i.e. illusion still tricks him. Thisness and thatness still tempts him. But no sooner
Attention deepened
Breath became sublime
A tender glow
poured from the pores
watchfullness
delinked me
from body
I crossed over along
the bridge of consciousness.
The poet Tej Raina is deeply rooted in the Shaiva tradition. For him human individual is Shiva himself in bondage. It is Vimarsha i.e. self reflective awareness that can remove this bondage. The manifestation becomes Ananda i.e. eternal bliss.
Lalded the mystic poetess of Kashmir is the guiding spirit for Tej Raina. He follows the vaakh tradition in his collection of verses in Kashmiri titled ‘vidaakh te vaakh’. The poet with the help of his friend Arvind Gigoo rendered these original Kashmiri verses into English with different presentation but staying close to the original. ‘Longings Buds and Blossoms’ may therefore be a different book but not an original one.
Tej Raina as a poet cannot be analyzed in text book manner. His verses are spiritual experiences. He writes for the pleasure of his soul. Written words motivate him to contemplate on the essence  and to merge into that essence. For that essence the poet has not to grope but to watch and recognize the pure through awareness.
Turn your perceptions towards
that which perceives
the essence within
witness witnessing
stainless watch
And be the
awareness pure.
The poems of ‘Longings, Buds and Blossoms’ come with their own structure of words. Noting is superfluous or exhibitionistic. Simplicity with splendor is the hall mark of these poems. The imagery is naturalistic and suggestive in conveying the spiritual under currents even sometimes in paradoxical way
The throbbing oil seed
seeking oil
from the vessels
that only keeps oil.
Progressive literature in the world is used for a cause and resistance. But the aim of metaphysical poets is to look within and go beyond the matter. The problem of individual vs society evades them. Tej Raina is also one such poet who ignores the contemporary realities. The conflicts of the turbulent times are unnoticed in his poems. Well his belief may not be to bring radical changes in the society but he certainly aspires that the individual tastes the nectar within. His aim is to keep awareness soaked in love for truth to reveal itself.
Is Tej Raina therefore, a philosophical poet? No, he is only a disciple of the unknown and longs to behold radiance. He is never pedantic. He is also showing the way to others when he says –
Do not carry the
basket of thoughts
unload
Do not grasp ignorance
it will yield you naught
Longings, Buds and Blossoms is a collection of poems meant for those readers who have spiritual leanings. These poems are woven for believing in the pure consciousness called chidanand. The poet has, however, a word of caution for the seekers of eternal bliss –
What matters
‘if mind chatters
undue
and ‘I’ keeps hooked to the body
knowledge  discerns the difference alone
If it can shed the differences
it will lighten
else
let them all suffer their trickery.
To conclude I may use the phrase of Osho, who says ‘spirituality is the journey of the alone to the alone.’
Tej Raina is not a poet for the masses. He inspires those who have the courage to journey alone. He is aware of the fact that ‘revealing mysteries to a duffer  is filling the vessels through the lids.
The poet is, however, at the cross roads whether to reveal or conceal. He expresses his dilemma in these words
How to reveal your heart
to a casual seeker
can darkness admire dazzling colours
What words can convey
to the non experienced
why become the butt of the laughter
Tej Rain is one such poet who takes pride in having just a handful of readers who are genuine seekers.