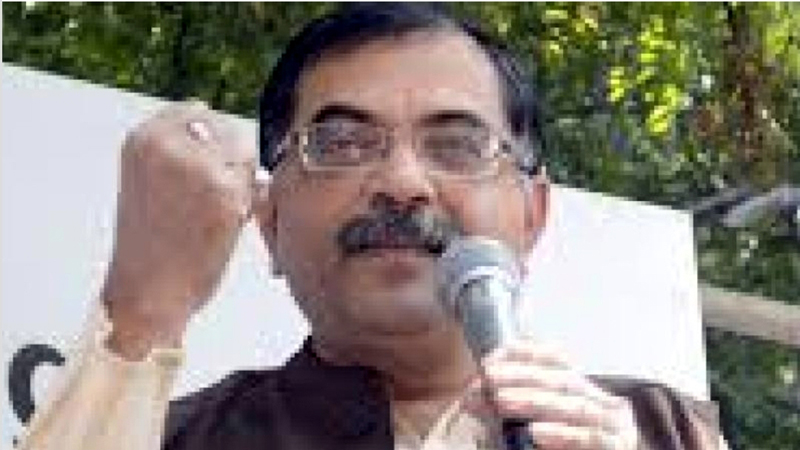 JAMMU, July 4: Prime Minister Narendra Modi’s Sindhu Pujan at Nimo during his visit to Ladakh yesterday for meeting the soldiers, has given a strong message of ever victorious Bharat Varsha and revived memory of India’s natural boundaries from Sindhu river in Baltistan to Indian Ocean in South.
This was opined was veteran writer, journalist and former Member of Parliament, Tarun Vijay, who is credited with starting Sindhu Darshan in 1997 after re-discovering the river in Ladakh, while talking to the Excelsior.
“By simply offering a few rose petals in Indus River, PM Modi has revived the memory of real India of Akhand Bharat and reminded us of India’s natural boundaries, described in our Shastras and Puranas, according to which, Bharat Varsha lies from Sindhu River in Himalayas to Sindhu (Indian Ocean) in south, ” he said while quoting a Sanskrit couplet.
Maintaining that Sindhu river signifies thousands years old journey of Hindus of Vedic people and Aryans, who inhabited this area, Tarun Vijay reminded that India drives its name from Indus and its civilization as Indus civilization. “Modi ji has recreated memory of Indus civilization in our hearts and reminded that entire Indus area from Baltistan to Indian Ocean belongs to India,” he said.
Stressing that a nation with memory is a nation with future while a memory less future is like a memory deleted computer, the veteran writer stressed that our society must revive the memories like Kashmir is called so because Maharishi Kashyap gave this name . “This fact is as important as we are all Sindhu Putras because of River Indus and Sindhu must be visited by every Indian,” he emphasized.
Admitting that still many people were not knowing that Indus River passes through India, Tarun Vijay reiterated that Indus River memory should be revived and more and more people must be encouraged to visit Indus, which is a symbol of India’s victory, spirituality, civilization and greatness since entire world knows us as people of Indus.
“Unfortunately after partition in 1947, a major part of River Indus went to Pakistan and people started feeling that perhaps Sindhu has gone away from them although they are known as Sindhu Putra,” said Tarun Vijay and recalled how Indus river was rediscovered in 1996 when he had gone to Ladakh with Lal Krishan Advani on an election tour.
“There we saw the river and when I identified it from the local SSP, I was surprised that we were on the banks of great Indus River. In the next morning I went to the Sindhu River along with Advani ji and we had a little Puja there,” he recalled and informed how Sindhu Darshan programme was planned with the help and guidance of RSS veteran H V Sheshadri after which a reception committee was formed under the chairmanship of then Congress leader Thupstan Chewang.
The former MP didn’t forget to mention that it was an all party, all religion programme, in which Anjuman Islamia, Christian Church, Ladakh Buddhist Association, Sanatan Dharma Sabha and all others came together . On 10th of October 1997, 72 people from all over India came to Ladakh with RSS veteran Madan Dass , L K Advani and K R Malakni for performing Sindhu Darshan while Pandit Jasraj sang on bank of Indus River without any platform, he added and also informed about visualizing Sindhu Ghat in Shey Syamla where people can have bath.
Tarun Vijay also threw light on the contribution of then Minister of Tourism and Culture, Jagmohan, then Delhi Chief Minister Sahib Singh Verma and then J&K Chief Minister Dr Farooq Abdullah in organizing the first ever Sindhu Darshan programme.

1st anniversary of abrogation of Art 370, 35A celebrated with great enthusiasm across J&K