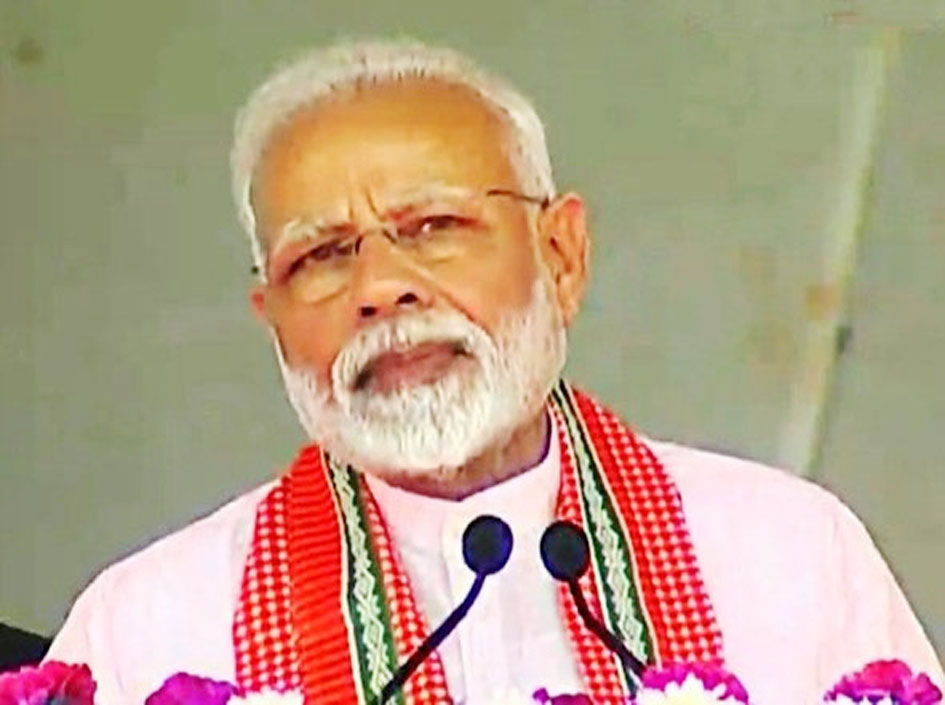 MADURAI (TN), Jan 27: Asserting his Government’s resolve against corruption and nepotism, Prime Minister Narendra Modi today assured ‘justice’ against the country’s economic offenders and said his ‘stir’ against graft has prompted a grand alliance of opposition parties.
“Any person who has cheated or looted the country shall be brought to justice. This is regardless of whether he is in India or abroad,” he said at a BJP rally here.
The Prime Minister was apparently referring to economic offenders — Vijay Mallya, Nirav Modi and Mehul Choksi who are wanted in connection with defaulting on huge bank loans. All of them are now abroad.
The Union Government was taking effective steps to rid the country of corruption and nepotism, he told the well-attended gathering.
“Any person who has cheated or looted the country shall be brought to justice. This is regardless of whether he is in India or abroad,” he said.
The Union Government’s effort against corruption has created a ‘stir’ from Chennai to Delhi, Modi said, adding all those who were used to making ‘different bills’ in Government contracts and welfare schemes, “are now facing the music.”
Attacking the proposed ‘Mahagatbandhan’ of opposition parties that has vowed to dislodge him in the coming Lok Sabha polls, Modi said “that is why they are all coming together.”
“They say that keeping aside all other considerations they must unite to remove this watchman. However, big a group they form, out of fear and negativity, Narendra Modi will stand firmly with the poor,” he said.
He urged the people of Madurai and the youth of Tamil Nadu to reject “these forces of negativity”.
Modi said the NDA Government was committed to strengthening initiatives for ensuring universal healthcare and the “pathpbreaking” Ayushman Bharat scheme is being implemented to holistically address health issues.
He outlined the welfare initiatives taken by the Centre on the health care front.
The AIIMS reflects the vision of “Ek Bharat Shreshta Bharat,” he said.
AIIMS in New Delhi had cultivated a brand name for itself in healthcare and with the AIIMS in Madurai to come up “we can say that this brand of health care has been taken to all corners of country from Kanyakumari to Kashmir to Madurai, from Guwahati to Gujarat,” he said.
Expressing confidence that the proposed AIIMS will benefit the entire Tamil Nadu, he said “the NDA Government is giving great priority to health sector so that every one is healthy and healthcare is affordable.”
Through the Pradhan Mantri Swasthya Suraksha Yojana, the Government has supported upgradation of Government medical colleges across the country, he said.
The Pradhan Mantri Matru Vandana Yojana and other similar plans are making safe pregnancy a mass movement, he said.
Besides in Delhi, there are six other functional AIIMS at Bhopal, Bhubaneswar, Jodhpur, Patna, Raipur and Rishikesh.
The Centre has also proposed to set up 14 news AIIMS across the country.
Expressing happiness over inaugurating the new super speciality blocks in Tamil Nadu Government medical colleges, Modi referred to the Central Government health initiative Mission ‘Indradhanush’.
The speed and scale of ‘danush’ (arrow) was working and seting a new paradigm in preventive health care.
The number of MBBS seats have been increased by almost 30 per cent in the last four-and-a-half years, he said.
The “Ayushman Bharat,” is a carefully thought out approach to ensure achievement of universal health coverage and it is a “pathbreaking intervention,” to holistically address health issues.
About 1.5 lakh health and wellness centres were being set up to provide comprehensive primary care and preventive health services, the Prime Minister said.
The PM Arogya Yojana (Ayushman Bharat Pradhan Mantri Jan Arogya Yojana) provides financial protection upto Rs 5 lach per family per year to cover over 10 core needy families in case of hospitalisaiton.
“It is the largest health insurance scheme in the world,” he said.
About 1.57 crore people in Tamil Nadu were covered under the scheme and in just over three months about 89,000 patients had undergone treatment for which more than Rs 200 crore had been authorised.
While the NDA Government was committed to Tuberculosis elimination by 2025, the Prime Minister said he was happy to learn that Tamil Nadu intended to achieve the goal by 2023, and pledged the Centre’s support for it.
“I once again assure that my government is committed to strengthening the initiatives in health care to ensure universal health coverage,” Modi said.
He dedicated 12 passport seva kendras in Tamil Nadu and said this initiative was one more example of improving the ease of living for our citizens.
The proposed 750-bed modern AIIMS here, on its completion, will also offer 100 MBBS seats.
Chief Minister K Palaniswami, who participated in the function, thanked the Prime Minister for providing the AIIMS facility to Tamil Nadu and urged upon the Centre to set up a medical college at the backward Ramanathapuram district.
Earlier, the MDMK cadres, led by its chief Vaiko, staged a black flag demonstration against Modi shortly before he arrived here, accusing him of betraying the interests of Tamil Nadu.
Police said the protesters were detained.
Releasing black baloons, the protesting party cadres raised slogans against Modi alleging that he betrayed the interests of Tamil Nadu on Cauvery and other issues.
In a counter move, BJP youth wing supporters put up posters sarcastically “welcoming Vaiko”.
Amil Nadu unit BJP president Tamilisai Soundararajan and Union Minister of State for Finance and Shipping Pon Radhakrishnan strongly condemned MDMK for the protest. (PTI)