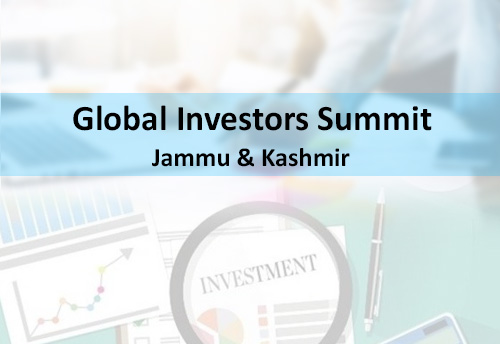 J&K Global Investors Summit on May 26, 27
*Jammu, Srinagar cities to get one function each

Sanjeev Pargal
JAMMU, Feb 22: First-ever Jammu and Kashmir Global Investors Summit likely to be held on May 26 and 27 is all set to be attended by Prime Minister Narendra Modi and host of other Ministers including Finance Minister Nirmala Sitharaman, Commerce Minister Piyush Goyal and Union Minister of State in the Prime Minister’s Office (PMO) Dr Jitendra Singh among others while Home Minister Amit Shah is yet to confirm his participation.
Official sources told the Excelsior that dates of the Summit have been finalized and it was likely to be held on May 26 and 27. While Srinagar, the summer capital of the Union Territory, is likely to get inaugural function of the Global Investors Summit as capital of the UT will be there in May, the ground breaking ceremony would be held in Jammu. However, a final decision on inaugural and ground breaking ceremonies of the Summit will be taken after more consultations between the UT’s representatives with the Prime Minister’s Office (PMO) and the Union Ministry of Home Affairs (MHA).
“Prime Minister Narendra Modi will inaugurate the Jammu and Kashmir Global Investors Summit on May 26 while Home Minister Amit Shah has been approached for ground breaking ceremony on May 27,” sources said but added that Shah’s participation was not confirmed so far. Once the participation of Shah is confirmed as the Union Territory Government was keen for his presence in the ground breaking ceremony, the Government will make formal announcement of dates and participation of the VVIPs in the Summit.
Finance Minister Nirmala Sitharaman, Commerce and Railways Minister Piyush Goyal and Union Minister of State in the Prime Minister’s Office (PMO) Dr Jitendra Singh are also likely to attend the Summit and chair different sessions. Participation of couple of more Central Ministers in the Summit is also expected and the Jammu and Kashmir Government was in touch with them. However, their names will be announced following confirmation of their participation.
Meanwhile, Dr Jitendra Singh today complimented Lieutenant Governor Girish Chandra Murmu for his outreach to investors and lauded first ever international investment through Scientific-cum-Medicinal Commercial Project with Canadian collaboration at IIIM in Jammu today.
Venues for the Summit in both the capital cities of Srinagar and Jammu will be decided in consultation with security agencies shortly in view of participation of high profile personalities and considering the fact that this will be the first-ever Global Investors Summit in Jammu and Kashmir as also the first major event post abrogation of special Constitutional provisions of Jammu and Kashmir and bifurcation of the erstwhile State into two Union Territories of J&K and Ladakh.
The Government, according to sources, proposed to spread investment proposals to different districts of the Union Territory and not confine them to the capital cities of Jammu and Srinagar alone to ensure that benefits of investments like job opportunities for the youth reach every part of the UT.
According to sources, the Jammu and Kashmir Government was expecting Expression of Interest in the investments in the Union Territory amounting to Rs 50,000 crore but might filter them and confine the proposals between Rs 10,000 crore to Rs 15,000 crore initially as it would require lot of infrastructure development to meet requirements of the industrialists.
The Government would prefer good investments in J&K. For instance, the investments which are not environment friendly might not be accepted.
The Government, according to sources, has created land bank of 6000 acres in Jammu and Kashmir for the investment purposes, which comes out to around 50,000 kanals. Of this, about 4000 acres land has been identified in Jammu region and around 2000 acres in Kashmir.
“The land bank will be increased with the increase in demand,” they said.
The Jammu and Kashmir Government has already identified Rs 2000 crore worth non-binding Memorandum of Understandings (MoUs) in Kolkata, Rs 850 crore in Bengaluru and Rs 2100 crore in Mumbai during roadshows held this month. Further roadshows have been planned at Hyderabad, Chennai and Ahmedabad during next fortnight.
J&K has identified 14 sectors, including horticulture, food processing, manufacturing, infrastructure, media and entertainment, film and tourism, to attract investments.
As already reported exclusively by the Excelsior there has been very encouraging response to the Investors Summit in many foreign countries and the UT Government has already started receiving Expression of Interest from many nations including United Arab Emirates, England, Singapore, Japan and others from Middle East and South East Asia.