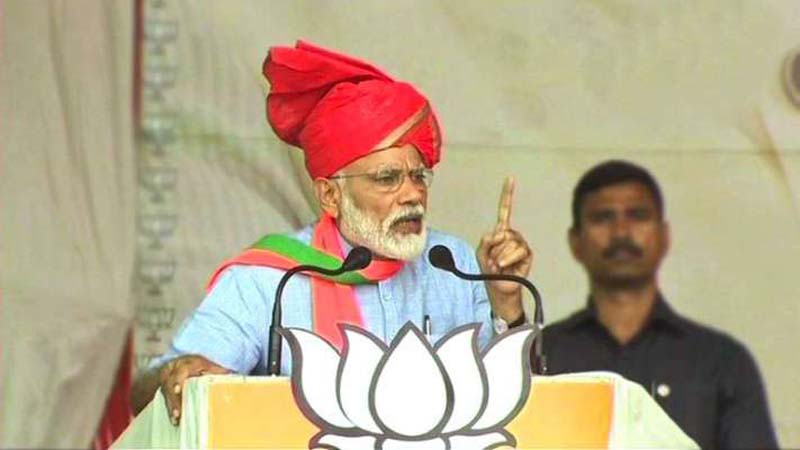 Sanjeev Pargal
JAMMU, May 8: Prime Minister Narendra Modi today hit out at dynastic politics of Abdullah and Mufti families in Jammu and Kashmir along with others and charged them with trying to crush intellect and talent even as he said the world was now not ready to listen to old narratives on Kashmir and it was India’s voice on terrorism that was being heard the world over. He charged Congress and its allies with trying to help stone pelters in Kashmir.
In an interview to an English news channel and series of tweets after addressing election rallies today, Modi came down heavily on politics of dynasts in the country in which he also mentioned Abdullah and Mufti dynasts.
“It was not only the Congress but their allies too were following the dynastic politics. While it was Abdullah and Mufti families in Jammu and Kashmir, there was Mulayam family in Uttar Pradesh and Lalu Ji in Bihar, who are running political parties on the name of their families. Similarly (Sharad) Pawar, Deve Gowda dynasties are also flourishing in Maharashtra and Karnataka while in Tamil Nadu it was Karunanidhi family and Chander Babu Naidu in Andhra Pradesh,” he said.
Modi said the parties which crush intellect and talent can’t represent the 21st century. Therefore, he added, whenever he raises questions on dynastic parties, they feel problems.
Earlier also, the Prime Minister had come down heavily on dynastic politics of Abdullahs including Farooq Abdullah and Omar Abdullah and Muftis including Mufti Mohammad Sayeed and Mehbooba Mufti.
Modi said the world-wide India’s view point on terrorism is being heard now and it (the world) was not ready to listen old tunes and narratives on Kashmir as was the case earlier.
“At one stage, only Russia used to be with India on the issue of terrorism and entire world, by and large, was with Pakistan, Now, except China and that too occasionally, entire world stands with India on the issue of terror,” he said, adding India has been successful in keeping its view point on terrorism before the world and, therefore, it’s voice is being heard all over.
Asserting that Pakistan continued to export terrorism, Modi said it was in this context that terrorism has become an election issue in the ongoing Lok Sabha elections.
“This is not a Municipal poll but the election of the country. There is a defence budget every year. Army is part and parcel of the system. They are concerned about security of the country and borders. So, the terrorism has to be an issue but we want to ask them (the Opposition) what policy they have to meet the threat of terrorism.
The Prime Minister said the Congress has come out openly in support of stone pelters and sympathizers of militants in Kashmir by promising to give them free hand.
“The Congress has been claiming that if it’s Government was formed in New Delhi, it will snatch special protection given to Army in Jammu and Kashmir and other militancy-infested areas,” he said, adding that the Congress which has objections to chanting of ‘Bharat Mata Ki Jai’ slogan, is also talking of ending the sedition law.
Referring to declaration of Jaish-e-Mohammed (JeM) supremo Masood Azhar as “global terrorist” by the United Nations, Modi said Pakistan has been compelled to take action against Azhar, who was responsible for several terror activities.
He reminded the Congress that despite making attempts during 5-6 years of their Government, they had failed to get Azhar declared as “global terrorist” from the United Nations as they had no intentions and no clear cut policy.
“The militants, who used to terrorize us, are themselves terrorized and have taken shelters to survive,” the Prime Minister said, adding it was because of the strong Government formed by the people that our brave Army soldiers have been killing the terrorists by storming their dens.
Modi wanted to know the Opposition stand on defence policy.
“They won’t reveal their stand as their past is such that they can’t speak on nation’s security. We are, however, committed to make India the world power. The world is listening to India because you had made the strong Government at the Centre,” he said.
The Prime Minister accused the Congress of “liking” what Pakistan does.
He said India’s diplomatic prowess made Pakistan release IAF pilot Wing Commander Abhinandan Varthaman within 48 hours after his aircraft was shot down.
“The Congress has so much love for Pakistan that they even give credit for the country’s prosperity to it. This is the truth,” he said.